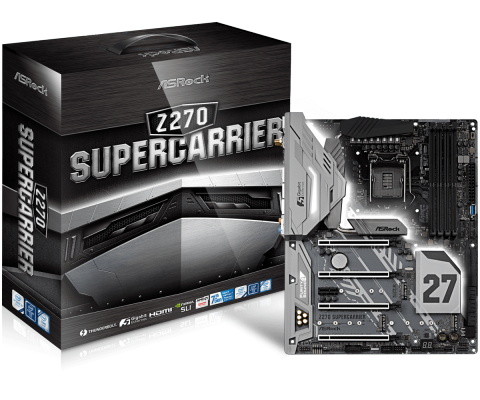 Far cheaper and arguably a better value than its top competitor, the Z270 SuperCarrier provides premium system builders with a boatload of features in addition to 3-way and 4-way SLI capability, but without the premium-class overclocking capability.

We recently marveled at how one of ASRock’s competitors was able to pack a full array of enthusiast-class features into a board that was only slightly oversized, stating that fitting all of those components into a standard ATX motherboard would have required a miracle (or more PCB layers). The standard ATX, lower-priced Z270 SuperCarrier is even better-equipped in some ways, but is it the miracle we were looking for?

The ways in which the SuperCarrier is better equipped than its upmarket competitor include the addition of Aquantia’s AQC108 5 Gb/s network controller, a second Thunderbolt 3 port, extra SATA ports (for a total of 10), and a third M.2 slot. ASRock reduces its price compared to that top competitor by using cheaper audio and Wi-Fi solutions, a cheaper heat sink set covering a less elaborate voltage regulator, fewer buttons and switches, and no voltage meter check points. The Z270 SuperCarrier also lacks U.2 connections, although these can be acquired via M.2 adapter cards.

Amazement further subsides when looking more closely at the I/O panel, which has no actual USB 3.1 (Gen 2) ports but instead feeds both Type-C connectors from the single Thunderbolt 3 controller. ASRock’s competitor chose instead to connect the same controller’s second port to a Type A connection, with all the flexibility and limitations that go with it.

The trio of Ethernet ports make some sense when considering that some users who lack 5 Gb/s hardware will still want to team the other two ports. The fourth network device, 802.11ac, is provided by Intel’s 433 Mb/s Wi-Fi/Bluetooth combo card in M.2 Key-E format.

Four of the chipset’s six SATA ports include PCIe links for SATA-Express, which at this point is primarily used by a small number of enthusiasts to host bay-mounted USB 3.1 front-panel controllers. You’ll still find these at some vendors, and ASRock used to include one in some of its previous-generation high-end boards. The thing I always hated about those adapters is that they waste the SATA ports. Worse still, the two ports that are disabled by placing a PCIe drive in M.2 slot 2 are among those that don’t have SATA-Express.

The Z270 SuperCarrier connects four stainless steel reinforced graphics slots to the CPU’s 16 lanes via a PLX8747 48-lane PCIe 3.0 switch. The slots automatically switch from x16-x0-x16-x0 to x8-x8-x8-x8 mode when cards are added to the second and fourth graphics card slots. Graphics cards aren’t normally forced to fight for bandwidth on the PLX8747, since SLI and Crossfire requires every card to receive the same data: This smart switch simply repeats that data to all four slot simultaneously. Yet all cards are then limited to x8 mode, leaving the CPU side of the controller needing only eight lanes of CPU bandwidth. Since three-way graphics is a more popular option, ASRock mentions that the fourth slot can still use its eight lanes for an alternative purpose, such as a slot-mounted M.2 drive.

ASRock noticed that most of us don’t like crushing our front-panel audio cables flat against the connector when installing a bottom graphics card, so the company added a second HD-Audio header with right-angle pins. That’s also a good way to lessen the length required for that cable to reach its header, which has been a problem on various cases ever since companies started putting the audio connector on the motherboard’s bottom-rear corner. ASRock does not offer a similar solution for the bottom-edge fan connectors, however.

Only two of the fan connections are capable of voltage-based fan control, but both of those are also rated to 1.5A for better support of high-watt pumps. I’d suggest using one of these for case fans via a splitter, so long as your case has three-pin fans. Similarly builder-friendly is the pair of USB 3.0 connectors located north of the top slot to avoid collisions with even the longest graphics cards. ASRock connects these via a hub, so all four ports are forced to share bandwidth. ASRock sends the matching chipset port to an internally-mounted USB 3.0 Type A port.

Very slim by high-end motherboard standards, the Z270 Supercharger includes only four SATA cables, in addition to required SLI bridges and the pair of Wi-Fi antennas. Still, it’s nice to see that ASRock included both an HB-style and traditional flexible bridge, in addition to the mandated 3-way and 4-way SLI versions.