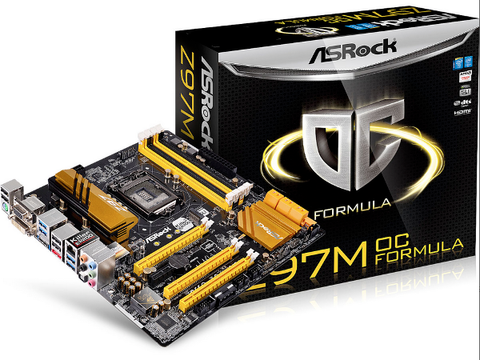 ASRock ships the OCF with a feature-packed BIOS that includes a few special overclocking features not commonly found on other mainstream boards. Of course, the usual overclocking controls are here as well.

Astute readers will notice the OCF's UEFI color scheme shift from blue to yellow to match the board itself. But there's no change in ASRock's typical layout or navigation. The tabs across the top still group relevant settings together. Like the Pro4 before it, the OCF also features FHD resolution support and a customizable My Favorite page. You can also select which page is shown first when you enter the UEFI. It seems like a minor feature, but I go into the UEFI dozens of times while testing these boards, so it's nice to go straight to the page I need. The Tools section still has BIOS flashing and driver installation over internet functions, customer support email from UEFI, Intel MEI recovery, and BIOS import/export to disk. Fan controls include ASRock's usual five settings: silent, normal, performance, full speed and a five-point customizable curve.

The OC Tweaker tab contains all the knobs and dials for tuning the board to your specifications. Quick configuration save slots are usually under the Tools section on ASRock boards, but the OCF moves them here and renames them to User OC Profiles. Also included are two sets of preset overclock configurations. The regular settings are a typical mix of 4.5GHz/1.23V, 4.6GHz/1.28V and 4.7GHz/1.4V, though that last preset is a little aggressive for my taste. The Nik Shih presets are meant for extreme overclocking. As you can see, all but one are meant for liquid nitrogen cooling.

CPU settings have both all core and per-core settings, so you can set your own tiered CPU clock depending on how many cores are active. CPU voltage control is also familiar to overclockers with adaptive and fixed modes, each with an additional offset available when the CPU is under load. The automatic setting at stock clocks seemed to undervolt the CPU too far and caused instability in certain loads. Most people who use this board won't use automatic voltage so it doesn't affect them. I'll explain it in more detail in the benchmark section of the review.

The OCF also offers a unique series of Boot/Eventual setting pairs for the BCLK frequency and DRAM voltage. These allow you to specify relatively tame settings for the more sensitive boot sequence, but then ramp up once the OS hits. I ran into boot problems when I had more than a 3MHz difference between boot and eventual BCLK settings (at least at the 100MHz strap).

The board was a little iffy when cold booting at 104MHz or above, but the layered settings bypass that limitation. The highest BCLK I could reach was 104.5MHz combined with a 102MHz boot frequency. Like the Pro4 before it, A-Tune can bump the BCLK higher after booting Windows — 108MHz in the OCF's case. My sample couldn't reach those speeds from boot alone, however. Using the other CPU straps of 1.25 and 1.67, the board maxed out at 140MHz and 176MHz, respectively.

CPU overclocking once again looks discouraging, despite the bigger VRM and heatsink. Like the Pro4, 45x 101MHz was stable, but 45x 101.5MHz was not. However, it seemed sacrilege to not give the OCF a better chance to beat its little brother. I took a little extra time and found that 45x 101.3MHz was rock solid, but 101.4MHz only lasted two hours under Prime 95. To be fair, I gave the Pro4 one extra shot, but it wouldn't budge past what I already found. An extra 10MHz on the CPU isn't much benefit for the extra price, but that's the CPU we have. I'll be sure to ask Intel to send us a golden Skylake sample for our LGA1151 reviews.

Like the CPU side, the OCF has a few extra toys for RAM tuning. The OCF has the normal primary, secondary and tertiary settings you'd expect to find. It also has two not-so-normal settings: a DRAM Tweaker and DRAM Preset list. The Tweaker displays all the SPD settings programmed into your modules and lets you pick which ones to use. The DRAM preset acts the same as the CPU overclock presets, except it has settings specifically for different DRAM chip manufacturers.

RAM overclocking was much more satisfying this time around. The OCF has a minimal RAM voltage cheat of 0.002V. However the board can only adjust in 0.005V ticks, which is negligible. The OCF had no problems running our Corsair set at its DDR3-2800 XMP timings in both two- and four-module configurations. Four modules wouldn't go much above the regular XMP settings, only reaching DDR3-2820 at 100.7MHz BCLK. Two modules were much more flexible and reached DDR3-2884 at a 103MHz BCLK. The 2933 bracket was usable if I loosened timings from the XMP CAS 12 to CAS 13. However, that actually results in less bandwidth. I also found an odd problem with DDR3-2800 settings in general having lower bandwidth than DDR3-2400. Unlike the CPU undervolting, this does affect many people, so be sure to stick around for the explanation in the benchmarking section.

The software with the OC Formula isn't much different from other ASRock models. The usual A-Tune utility is renamed to "Formula Drive" to accompany its golden color shift. Functionality is exactly the same as the X99 OC Formula's version, so let's not waste time going over it again. Other utilities in the suite (XFast LAN, ASRoc APP Shop and the wonderfully useful Restart to UEFI) are exactly the same as well.

Two new utilities are included: Timing Configurator and Rapid OC. Contrary to the name, the Timing Configurator only lets you see RAM timings; it doesn't let you change them. According to ASRock, this is due to a change in the Z87 and Z97 chipsets. Rapid OC is a small program that lets you tune and overclock the motherboard on the fly. You map keystrokes to certain tasks like bumping the BCLK frequency, CPU multiplier or VCore. Learning it is a steep but short learning curve, but for a quick adjustment it's certainly faster than opening up Formula Drive.