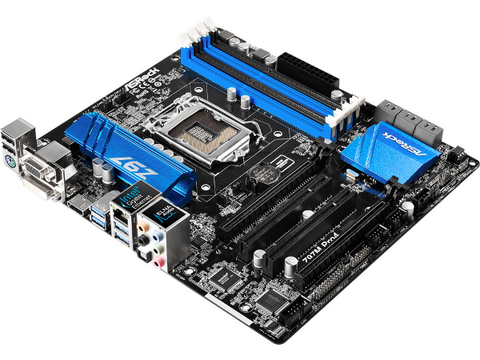 Now let's look at the layout in more detail.

While larger than the low-budget boards I reviewed, the Z97M Pro4 is still not quite a "full-size" mATX. At approximately 8.5 inches wide, it's about 1 inch shy of the full width allotted in the mATX specification. That means the board's right edge doesn't quite meet the standard stand-offs and hangs free instead. While this doesn't impair case mounting, the board doesn't have any support under the 24-pin power plug or the RAM slots. Take care to support the board from underneath if you connect these things after mounting the board in your case.

Across the top is the usual 8-pin EPS plug and three fan headers. Directly below the VRM heat sink, in ASRock's usual odd corner, is the HD audio header. I don't dislike this placement; I just prefer the cleaner cable management that's possible with the audio jack on the board edge. Just to the right of the audio header is a chassis fan header and the CLR_CMOS jumper. Unlike the H81 boards, this jumper is located to the left of the CPU socket, meaning it's much more accessible. Down the front edge is the 24-pin ATX plug, USB 3.0 header just above the PCIe slots and six forward-facing SATA ports.

The top PCIe slot is 3.0 x16. As is often the case on mATX boards, this slot is almost level, height-wise, to the lower RAM slot release tabs. The backplate on the R9 290X I use for testing was actually abutting the tabs, so swapping out RAM modules sometimes meant removing the GPU entirely. The only other PCIe slot is at the bottom of the board, with two regular PCI slots in between. This second PCIe is wired for four lanes from the chipset, so it runs at slower 2.0 signaling.

This means no SLI support on the Pro4, though CrossFireX is technically supported (even though few people would use it). The 2.0 x4 bandwidth limits performance, and the cooler would block every header on the bottom edge. While most people won't use the serial, parallel or even USB 2.0 headers, the front panel connectors and 4-pin fan header are more than a little important. Other headers along the bottom include a TPM, chassis intrusion, case speaker and Thunderbolt connector. To use the Thunderbolt, you'll need to purchase a separate add-in card.

The rear I/O panel is somewhat meager for a Z board. The Pro4 covers the basics with two USB 2.0 ports and single PS/2 ports for your keyboard, mice and peripherals. Four USB 3.0 ports cover your high-speed external storage needs. Audio is provided by a Realtek ALC892 chipset with ELNA caps and can support up to 7.1 channels while Intel handles the network side with a gigabit I218-V controller. I would've liked to see two more USB 2.0 ports, or maybe an eSATA. Since all six USB 3.0 ports on the chipset are exposed, wishing for any more would require an add-on controller — but that's probably too much to ask for at this price point. In those unlikely cases you use the onboard video on this board, you get a VGA, DVI-D and HDMI connector.

I don't understand why VGA connectors still take up space on so many Z boards. Onboard video has its uses, not least of which is troubleshooting. But how many people regularly use onboard video on an enthusiast board? Of those, how many have VGA-only monitors? VGA ports make great sense on lower-end boards. Those will often be used in offices or homes with older monitors and no discrete GPU. But how many enthusiasts want a VGA connector on a Z board? As usual, I'm sure some naysayers will let me know otherwise in the comments.

Packed with the board are a manual, an installation CD, two 18-inch SATA cables (one angled connector) and an I/O shield. I think four SATA cables is more appropriate on a Z board, since the end user is more likely to have at least three drives (SSD, spindle HDD and optical drive). An M.2 slot would explain only two cables, but the Pro4 doesn't have one. Those omitting the optical drive will fare just fine.