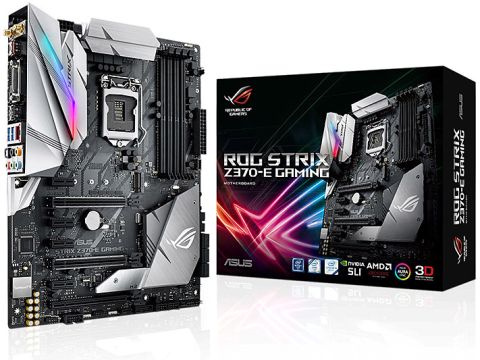 Disabling both limits allowed system power to climb to 210W, with a reported CPU TDP of 160W. Since we were seeing the proper Turbo Boost frequencies for various numbers of loaded cores, we considered this “good enough” to get an accurate comparison.

The Strix Z370-E Gaming has a 100.3MHz BCLK, which may account for its small lead in 3DMark. Surprisingly, that doesn’t seem to have as much impact on Sandra’s Arithmetic and Multimedia scores.

The Strix Z370-E Gaming's gains in Sandra Cryptography are more closely related to its memory-bandwidth score than its minuscule CPU overclock. Advanced memory timings are the one place a manufacturer can attempt to seek performance gains.

Memory performance really is a big deal in some benchmarks, such as our lower test settings of Ashes of the Singularity and, more acutely, F1 2015. We’re somewhat surprised to see such small changes in bandwidth show up at the lower settings of Metro and Talos, however.

Less work time means better performance in most applications. The Strix Z370-E Gaming wasn’t consistently faster or slower than its competitors across our mixed workloads or Adobe Creative Cloud, but it did lag trivially behind in Office.

Our EVGA Z370 FTW review showed similar power behavior to the Strix Z370-E Gaming, yet increasing its limit to allow Prime95 small FFTs to run at a constant 4.30GHz CPU clock caused peak wattage to climb only from 129W to 148W. The Strix Z370-E Gaming went from 144W to 210W. Most of the competing boards fall somewhere in the middle.

Without CPU throttling, the Strix Z370-E Gaming’s efficiency is on par with that of the ASRock Z370 Taichi.

Most boards near the Strix Z370-E Gaming’s price will reach a CPU ratio of 48x at 101MHz BCLK with 100% stability (even Prime95 small FFTs) at 1.30V CPU core, a point that our CPU has been unable to cross due to its thermal limits. Two boards were slightly behind that high mark, and the Strix Z370-E Gaming was one of these, in our tests. At least it pushes DDR4-4000…

A few generations ago, several motherboard manufacturers were using quite loose advanced timings to reach DRAM overclocking records without regard for performance. Because the goal of most overclockers is to improve performance, we’ve added a chart to show how well the modules work at these high settings. This Asus board does well, as does the EVGA and the Gigabyte.

Certain readers want to see some kind of value chart, even though such performance-per-dollar charts can’t accommodate changes in features. Having noted that, the Strix Z370-E Gaming’s feature set is fairly solid for the sub-$220 market. That makes sense since, at $210, it sits near the top of that market.

Priced around $10 lower than the Strix Z370-E Gaming, MSI’s Z370 Gaming Pro Carbon AC lacks the Asus board’s second USB 3.1 Gen2 controller. The value of that controller is probably a bit more than the price difference , yet those who don’t have the required case might not want to pay for the extra controller. Concerning value, your need for that interface should determine the winner.

For around $10 more than the Strix Z370-E Gaming, ASRock’s Z370 Taichi gives users dual Gigabit Ethernet, an added SATA controller, and a two-digit status code display. It also does x8/x4/x4 from the CPU across its x16-length PCIe slots, which would be a huge boon to storage geeks, but that configuration also prevents it from supporting SLI when a card is installed in the third slot. SLI requires at least eight lanes per card. But maybe you are a storage geek? Or maybe you aren’t going to use that slot? It’s a blessing or a curse, depending on your configuration.

The most feature-packed of the competitors, Gigabyte’s Z370 Aorus Gaming Seven has dual Gigabit Ethernet and dual USB 3.1 Gen2 controllers, but no onboard Wi-Fi module. This might look like a fine board for buyers who eschew Wi-Fi on desktops, but it’s also priced $40 more than the Strix Z370-E Gaming. Show builders will appreciate the extra onboard RGB lighting, overclockers will appreciate that we reached a slightly better CPU clock, and coupon cutters will be able to appreciate that it's frequently discounted to $220 or less.

That leaves the Strix Z370-E Gaming at roughly a tie with the major competitors outlined here, apart from a very, very minor overclocking deficit that won't matter to any but the most tweaking-minded. Once again, we’d make our choice based on interface preferences, but this is a solid board that