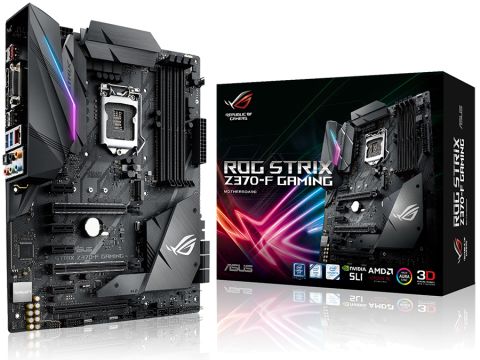 The previously tested Z370-E Gaming sets the pace for the Z370-F Gaming’s performance in synthetic benchmarks, since the two boards have the same layout and differ primarily, from a benchmarking perspective, in their firmware revisions. The Z370-F Gaming includes the latest firmware-based security patches, while the earlier board’s firmware predates those.

Performance between the two Asus models appears similar, as the two swap positions in different titles. Asus’ slight advantage over competing brands here appears to be limited to its memory bandwidth, as memory configuration is the place Asus takes the most pride in optimizing.

We saw the Asus memory performance advantage primarily reflected in Sandra’s Memory Bandwidth and Cryptography scores above, but games are a good place to see this reflected in the real world. Though most systems are too GPU-bound to express that advantage at real-world quality settings, we can see the impact at our lower settings for each game.

Of course, F1 2015 got the biggest FPS boost from improved memory performance, and that’s why it’s also used in memory reviews, yet the larger outlier comes from the Z370 Gaming Pro Carbon AC in Talos. That dip occurs when its Nahimic 3D positional audio software is enabled, and Talos is the only game in this test suite that’s compatible with the app. Though a useful app, disabling it regains the FPS lost.

Less time is more performance in timed tests. There’s no clear indication why the Z370-F Gaming took a little more time to complete the Handbrake format conversion than other boards here, but it also completed the Adobe Illustrator file-creation test a little quicker than the other boards.

The current generation of Intel processors (both Coffee Lake and Skylake-X) are rated at frequencies that, when fully loaded, exceed Intel’s stated TDP. Various methods have been employed to maintain the TDP, including AVX offsets that reduce frequency by a fixed value below rated frequencies, but most "enthusiast-class" motherboards simply ignore that TDP to a greater or lesser degree. Because of those efforts, we’ve put a great amount of time into finding the most consistent way to evaluate full-load power consumption at a fixed frequency…without overclocking.

“Asus Multicore Enhancement” is supposed to hold up higher-frequency turbo ratios at higher-core loads, but setting it to "disabled" in this case caused some unusual behavior. We'd suggest working with this setting enabled.

So, you’ll ask, how did we get the power and CPU-core heat of the Z370-F Gaming so much lower than the Z370-E Gaming? By switching SVID Behavior from Auto to Typical. As for the higher voltage regulator reading…we found a hotter place to stick the probe.

In other words, the efficiency gained by the Z370-F Gaming is due entirely to our efforts to compare the board fairly to competing brands. And lest anyone say we were unfair to the Z370-E Gaming, its power readings are the same as those of Asus’ recommended settings.

The MSI boards beat the Asus and ASRock boards by a trivial amount in overclocking, due to MSI’s ability to hold the loaded core voltage closer to our 1.30V heart’s desire. Of course, we only desire that voltage because it pushes our CPU overclocks close to the processor’s thermal limit.

One thing that must be noted about the Z370-F Gaming’s overclock is that its four-DIMM memory clock was 80MHz higher than its two-DIMM data rate. That’s opposite of our normal findings. It could mean that Asus is using more relaxed advanced timings when four DIMMs are installed, to boost stability. It’s a good thing we test these boards both ways!

Given its reduced feature set, the ROG Strix Z370-F Gaming should be around $30 cheaper than its Z370-E sibling. Sometimes it is, but only when the -F version is getting a discount that the -E isn’t.

We started today’s review by considering the differences between the Z370-F Gaming and the previously tested Z370-E Gaming, concluding that the difference in price just about matches the reduced feature set. Both boards use the same layout, and the biggest negative impact of using the same layout on a board with fewer features appeared to be that two of the pathways that could have went somewhere…ended up going nowhere. Our test results have changed none of those assertions.

Tough pricing competition comes from ASRock’s Z370 Extreme4. It has the same scarcity of USB ports on the I/O panel, the same lack of a 10Gb/s USB front-panel header, the same slot layout, and even has more SATA pathways shared with its M.2 interfaces. (That last part’s a bad thing.)

That leaves the Z370 Gaming Pro Carbon AC. Priced between the two Asus boards, it offers most of the features of both. It’s lacking the second USB 3.1 Gen2 controller of the Z370-E Gaming, but that controller steals PCIe x1 slots. That said, the slots it steals are adjacent to graphics cards.

What’s really happening is that we’re once again finding very close value parity among the four top boards in the Z370-F Gaming’s market segment--again!--regardless of how badly we wanted to crown a winner in this test group. Rather than be annoyed by the lack of a clear victor, we’ll be glad that users get to pick their board not by brand, but by features and price. That means more options for everyone!

Prev Page How We Test
5 Comments Comment from the forums