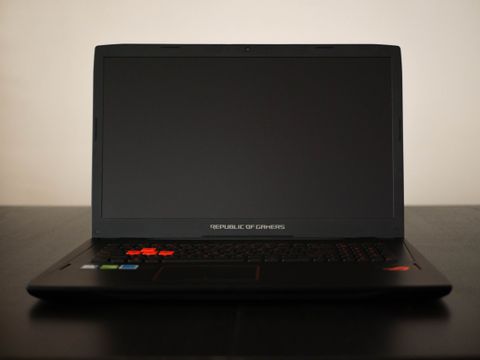 The Asus Strix GL702VM-DB71 offers excellent performance in a well-presented 17.3" package. It has just as much performance as the Strix 15 for the same price. The Strix 17 also offers at least two hours of gaming on battery life. Unfortunately, it is plagued by poor thermal performance and a display that exhibits some color accuracy errors.

Asus impressed us last month with the Strix GL502DB-71 because of its excellent performance and attractive price point. Today, we’re looking at the Asus Strix GL702VM-DB71. It also comes with a 6th-generation Intel Core i7 CPU, an Nvidia GTX 1060 GPU, and 16GB of memory, making it practically the same as the Strix 15, but in 17" form. Will the Strix 15’s larger brother give it a run for its money?

At the top, we’re treated to a gorgeous, black-brushed metal surface that could be described as minimalist, if not for Asus’ orange accents in the middle. There are two trapezoidal neon orange bars surrounding the identically colored ROG logo in the middle. These orange accents light up when the Strix 17 is powered. On the far end, just above the hinge, is “Republic of Gamers” stamped in white print. Overall, the top of the laptop’s design has a sophisticated appeal to it, but the well placed accents and aggressive edges give it an unmistakable gamer-centric quality. While the top portion is a sight to behold, the aesthetics are easily blemished from constant handling, and you’ll need to wipe the surface often to keep it fingerprint free.

Unlike the elegant top half, the bottom panel is much bolder. On the four corners are aggressively shaped rubber feet colored in neon orange to match the accents on the top. There are five intake vents across the sides and middle of the bottom panel, and three large exhaust vents are located on the back. There are angular engravings strewn all over the bottom panel’s surface. The bottom panel is plastic, and while it doesn’t feel as satisfying to touch as the top’s brushed surface, the bottom also doesn't feel cheap. The Strix 17 has very little flex overall.

On the inside where the input devices are located, you’ll find a fusion between the Strix’s top and bottom aesthetics. The surface features a brushed texture much like the top of the laptop, albeit in a matte plastic; this makes fingerprints harder to spot. Just like the bottom panel, the inside surface features aggressively angled accents.

The Asus Strix’s hinge extends the display about 135° and is neither too rigid nor too loose.

We’re pleased to find that Asus placed the Strix 17’s laptop speakers in a front-facing position. Usually we find laptop speakers placed in inopportune locations, like on the bottom, which muffles and diminishes the sound quality. In this case, the speakers are placed under the keyboard and are hidden by a neon orange speaker grille. The Strix’s speakers are decent, if a little bass heavy. They can reach high volumes easily, but start getting distorted around 85% volume.

The right only has a few ports: an SD card reader, two SuperSpeed USB 3.0 ports in red, and a Kensington lock. The left I/O features a combination headphone-out and microphone-in jack, another SuperSpeed USB 3.0 port (also in red), a Thunderbolt 3 over USB Type-C port, an HDMI 2.0 port, a Mini DisplayPort, and a gigabit Ethernet port.

The Strix 17 features a fully-fledged, back-lit chiclet keyboard with a number pad. The spacing between keys is excellent, meaning your hands won’t feel cramped after hours of gaming or typing. Most of the keys feature a neon orange print, but the WASD keys swap the color palette around with orange keys and a black print. The keys are lit in Asus’s signature ROG red lighting, and feature three levels of brightness. Finally, the power button, which is another key, is located inconspicuously at the top right of the keyboard.

Below the keyboard is the Strix 17’s orange-bordered trackpad. The trackpad has excellent tracking and a satisfyingly smooth surface, which seems to be a rare commodity among gaming laptops. The trackpad isn’t so amazing that you’ll replace your gaming mouse with it, but in circumstances where a mouse is either unavailable or unnecessary, you won’t find yourself annoyed with it.

If you’ve read our review of the Asus Strix GL502VM-DB71, then the Strix 17’s internal layout will look familiar. The Strix 17’s bottom panel is attached via 10 long screws, but a thin object such as a credit card is necessary to pry off the panel. Underneath you’ll find two copper heat pipes leading to the CPU and GPU. The heat pipes are routed to two exhaust fans on the left and the right. The GPU has an additional cooling fan right above it. To the left of the third fan is the Strix 17’s two memory slots. The M.2 slot is at the far right, just above the two GPU fans; the slot is empty in the DB71 configuration. At the top left is the 2.5” SATA slot, occupied by a 1TB 7200RPM HDD. Finally, at the top is the 76Wh lithium-ion battery.

Just like all of Asus’s ROG gaming laptops, the GL702VM comes pre-installed with the ROG Gaming Center software. This central hub integrates Asus' other gaming applications, such as GameFirst and ICEsound, letting you control your laptop via one application. We talked about ROG Gaming Center in our reviews of the G752VS OC Edition and the GL502VM-DB71, so be sure to check them out if you haven't already!