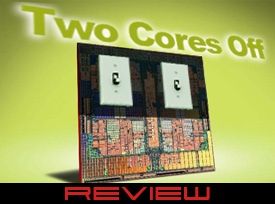 Everybody is getting excited about the upcoming Phenom II launch. AMD has already released a bit of information, saying that the 45 nm Phenom II has reached 6.3 GHz cooled with liquid nitrogen, and the pre-release press information indicates that overclocking margins could be as substantial as the potential of a Core 2 processor. However, Phenom II isn't here yet. But AMD {has} just introduced a new Athlon X2 product, which is based on the Phenom's Stars core. We're taking a look at the Athlon X2 7000-series, which brings AMD's dual-core performance up a bit.

While AMD's upcoming Phenom II processor represents a new product, shrunk to the new 45 nm DSL SOI process and with more cache memory, the Athlon X2 7000-series is nothing short of the already-well-known Phenom on the bug-fixed B3 stepping. You can tell this by the model numbers, which all end in 50. The 7000 model number most likely was chosen to compete with Intel's Core 2 Duo E7000 series, which includes the same total amount of cache memory. However, while the new Athlon X2 7000 comes with 512 KB L2 cache per core and an additional 2 MB shared L3 cache for both cores, Core 2 Duo E7000 just has its 3 MB shared L2 cache.

The processor die of today's launch is identical to the Phenom X4 and X3, but only two cores are activated. While this is a performance disadvantage for multi-threaded applications, it introduces an advantage in terms of power consumption, as two processing units require less power than three or four. In addition, AMD now has the option to recycle Phenom processors that might have issues with up to two cores. With two cores disabled and re-branded to Athlon X2, the new generation takes on the old Athlon X2 at up to 6400+ speeds, as well as the Core 2 Duo family.

Black Edition Is A Go!

The Black Edition processors (BE) are the most interesting ones, as they come with unlocked multipliers. Hence, it is possible to more easily overclock these. Only the 2.7 GHz top model Athlon X2 7750 is a Black Edition--the two other models are called 7550 and 7450, running at 2.5 and 2.4 GHz. All Athlon X2 7000 processors are at 95 W Thermal Design Power (TDP), although AMD mainstream processors typically stay below that.

Catching Up With Core 2?

The big question is: can the Athlon X2 7000-series catch up with Intel's Core 2 Duo processor family? In the end, the new chip comes with 512 KB L2 cache per core and the Phenom's 2 MB L3 cache, which might provide an advantage. AMD caches are exclusive, which means that contents stored within one level of the cache aren't stored redundantly in a lower level. We'll break the anticipation early: the 45 nm Core 2 family remains faster, but the new X2 7000 still represents an excellent option for users who insist on ideal price/performance ratio, and--more importantly--for upgrade users who already use a socket AM2/AM2+ system.