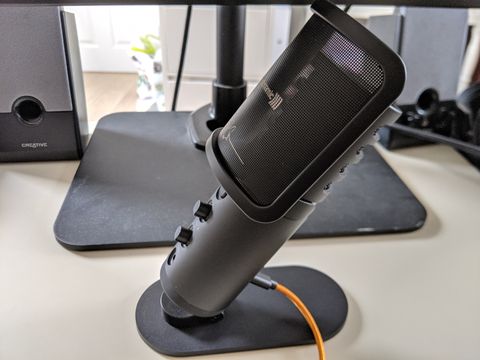 Finally, the line between good-quality USB streamer mics and studio equipment with pro-audio specs has started to blur. This Fox offers the best of both worlds for an amazing price, all things considered.

Who wants to be a streamer? At the moment, it seems like that answer is just about everyone. In days gone by, kids grew up dreaming of one day stepping out onto the turf of a premier league football team (that’s Soccer for the US guys out there) for their day job. Now, childhood aspiration is often about donning a snapback hat and asking “what is up, you guys?” to an audience of millions.

Perhaps a microphone review isn’t the best home for a debate about the merits and dangers of such a preoccupation with broadcasting ourselves, but it is the place to say that if streaming’s a fad, it’s one that’s lasted many years and changed the face of PC gaming peripherals. Amidst the arms races contested by gaming mice, keyboards, headsets and even chairs, a fascinating little scrap is happening in the mic space. And when products like this Beyerdynamic Fox, one of the best gaming microphones, pop out of it, everyone wins.

The Fox is an enthusiast-level mic with pro-audio cred. You can see it on the spec sheet in its 96KHz, 24-bit recording quality, and in the look of the mic itself. This isn’t a ‘gamer’ aesthetic, but instead a look similar to Beyerdynamic’s many respected studio mics, which have graced professional recording environments for decades. Interestingly, it seems to take its visual cues from the TG series of supercardioid mics used for recording drums, despite its intended purpose for vocal recording, but nonetheless it looks inarguably "pro." And happily, the pro look goes deeper than just the surface. By and large, the Fox really can straddle the worlds of gaming and pro audio.

Included in its reasonable £120/$150 price is a large diaphragm condenser mic with a USB-C connection, a smart braided USB-C cable, a clip-on pop shield which sits 1 ¼ inches from the mic, and an adjustable stand. On the front, volume and mix controls sit above a headphone input, and above all that is a mute button which flashes when enabled so that you’re sure when you’re off air. There’s just one control at the rear, above the USB-C connection: a slider which flips between high and low input modes for recording near or far away from the mic.

Those package contents sit in line with other market competitors we’ve tested recently from Logitech, Razer, and HyperX. And like HyperX’s Quadcast for example, it can be fitted to a boom arm if you don’t want to use the supplied stand. The inclusion and design of the pop shield sets it apart in our minds though -- it’s a simple clip-on design that literally couldn’t be easier to take off and on as the occasion calls for it. And unlike cloth mesh designs which rip and -- there’s no pleasant way to say this -- absorb a lot of spittle over time, this metal mesh design can easily be cleaned. We’d never advocate eating while recording into a mic, but if you absolutely must choke down a pizza while shoutcasting, at least you have the option of cleaning up after yourself pretty effortlessly.

The desk stand can be tilted at an angle, and stays in place once you’ve adjusted it thanks to a sturdy design and good-quality construction materials. It’s a little easy to knock off balance if you need to make adjustments to the controls if you do have it tilted back, though. There’s definitely potential for hitting the mute button and knocking it over.

Happily though, when using the desk stand the Fox isn’t overly sensitive to knocks and bumps against your desk. It filters out unwanted sounds without adding that artificial, heavily noise-gated sound to your vocals. Mechanical keyboard clicks do still creep in, but they’re less prevalent than in other mics we’ve tested.

It was that 96KHz, 24-bit recording quality which really caught our eye when the Fox turned up, though. Previously, our primary reservation with USB mics from gaming peripheral companies was that for all their ease of use and great sound quality when recording vocals at a certain distance, they were a bit limited compared to studio mics. If a new mic came along that could maintain that ease of use while also tackling a broader range of recording scenarios and hitting studio-quality recording fidelity, that would surely be the holy grail.

The reality? Yep, the Fox is pretty much that. This mic isn’t quite a studio mic capable of displacing an MC840 studio condenser at ten times the cost, don’t get us wrong. But compared to the other USB streaming mics we’ve tested, this one’s much more comfortable recording instruments and musical performances than its peers.

96Khz sample rate and 24-bit depth is important in the studio because it ensures minimal compression or clipping while all the subtleties in the sound are preserved. The reality of broadcasting your voice over platforms like Twitch and YouTube is that anything above CD-quality (48KHz, 16-bit) is a bit of an irrelevance since the signal will be compressed so much as it travels to your viewers. But if you want to do more with your mic -- and why shouldn’t you since you paid for it and it’s sitting there on your desk -- that’s when the virtues of higher fidelities make themselves known.

During our testing, we found the Fox is great at recording vocals both close up and at distance. Just a flip of the high/low input control at the rear ensures the signal doesn’t come in too hot and start distorting when you’re belting, and that the whispery high-end quality isn’t lost when you come up close for a more intimate ASMR-like vocal delivery.

The Fox is capable of recording instruments and vocals with decent results, too. Just whack the input up, take a step back and you bring a little room sound into the mix along with the vocals and, for example, acoustic guitar.

We pushed the Fox still further out of its comfort zone by placing it at the speaker cone of a 2X12 amplifier cabinet and blasting out some electric guitar, and it captured that pretty well, for a single polar pattern cardioid condenser. Shure’s SM57 can sleep easy at the end of the day when it comes to recording guitars in the studio, but as an all-purpose mic with a super-handy USB connection the Fox makes a great ringer.

Monitoring the sound from the headphone jack is a bit tricky, however, because the audio tends to distort much quicker through the cans than it does in the recording itself. We found that recordings that sounded clipped while we were monitoring them actually came out fine in DAW playback, with no evidence of clipping on the waveform.

Based on our experience, we’d say the built-in headphone preamp is a bit lacking compared to the rest of the package, but it’s easy enough to circumnavigate. You might opt not to monitor recordings while you perform them, or do a bit of fiddling in your DAW to listen to the track through headphones/monitors connected to your PC. And this is specific to more demanding recording scenarios. It’s unlikely that you’ll be shouting so much during a Twitch stream that you’d hear clipping through the headphone preamp, or indeed that you’d be listening at all.

Back to the more fundamental purpose for the Fox: recording spoken vocals from about a foot or so away, on a PC desktop. Simply put, this mic sounds fantastic for that. It has the high-end sparkle and light-touch DSP wizardry to make your voice sound professional and broadcast-quality. But compared to the Quadcast, Razer Seiren and even the hallowed Blue Yeti, it retains a little bit more richness, too. You really have to listen out for it -- we’re not talking about a night-and-day difference. But it’s there.

There’s only one drawback here, and it obviously exists in order to deliver the stellar quality the Fox achieves: There’s just one polar pattern. Cardioid is a great all-rounder mic technology, and with careful placement it can manage a few different recording tasks. But what it can’t do is record two voices easily for a podcast or a dual-streaming setup. Most of its competitors offer a choice of narrower, broader, or two distinct polar patterns for these scenarios. So it would have been ideal to flip to bidirectional mode and get that same great vocal recording without having to smush cheeks with your company like the Beatles.

Our experience with the Fox has been simply fantastic. We’d been hoping for a USB mic that takes on a bit of pro audio capability, and along it came with fundamentally great vocal recording sounds, a sturdy build, sensible controls and 96KHz / 24-bit recording quality. Sure, the headphone monitoring isn’t the best since the preamp breaks up much earlier than the mic itself. But in most cases that won’t prove a problem. Its absence of a bidirectional polar pattern is the only lasting negative we can level at Beyerdynamic, although perhaps it paves the way for a later model with a second diaphragm.