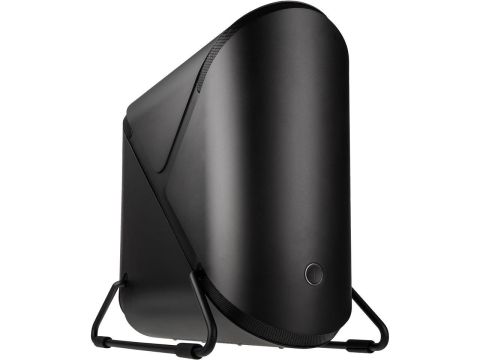 The Portal’s relatively uncommon and functional design combined with its smooth curves and finish, make it a good HTPC case for those willing to pay a premium.

Fresh off the drawing board, Bitfenix’s latest case—Portal—looks to bring all the benefits of a tower case to the HTPC market, without the brick-like look that usually accompanies such a form factor. With its smooth curves and clean cut lines, we’d say that the Portal does a reasonable job achieving this goal and would probably blend in well enough in most environments, be it on a desk next to a monitor or sitting beside a TV in an entertainment center.

Although it's purpose built as an HTPC case, Bitfenix does go out of its way to mention that the Portal can also be used as a gaming case, with plenty of room to fit full size graphics cards and even a compact AIO cooler. With that in mind, can it still stand up to our gaming oriented test suite?

The Portal design is smooth, with not a single sharp corner to be found anywhere on the exterior. Up top you’ll find a clear acrylic window, which, when combined with the upside down orientation of the motherboard, offers up a view of your graphics card and a small glimpse of the rest of the case’s inner workings. If you’re seeking a more minimalist look, or if windows just aren’t your thing, the Portal is also available without a window. Furthermore, both versions of the case are also available in a white paint job if black also isn’t your thing. Finally, if you’re short on space, the stand is also removable, though we’re not sure what good that’ll do, considering the bottom of the case isn’t flat and it can’t stand up on its own.

Further examination of the case reveals a front mounted power button/power light, and for those who like their case next to a monitor on the left side of a desk, there's a set of I/O ports and hard drive activity light on the right. The I/O port offering on the Portal meets typical expectations for a Mini-ITX case, with a pair of USB 3.0 ports and the usual set of audio jacks.

On the rear of the case we find an upside down mounting configuration for the motherboard as well as a cutout for an SFX power supply. In the cooling department, there’s mounting room for one 80mm cooling fan. Yes, you read that right. Even though on first glance it looks like there might be room for an extra 80mm cooling fan below the first one, there actually isn’t quite enough room. In what seems to be odd design choice, the second pair of holes on bottom and the extra space seem to be for nothing more than extra room for airflow and perhaps an alternate mounting position for the included exhaust fan.

By now, some of you have probably noticed that there doesn’t seem to be any obvious way of accessing the inside of the case for hardware installation. As it turns out, the pair of thumbscrews at the bottom of the case happen to hold the answer.

In an interesting bit of engineering, Bitfenix has chosen an unusual way of letting you access the inside of the case without the use of removable side panels. After removing the pair of thumbscrews you see in the previous photo, the entire back end of the Portal, along with the internal structure, slides out of the back of the case along a built-in rail. Though slide-out motherboard trays used to be "the thing" back in the early 2000s, they’ve almost completely faded away since then. Furthermore, in almost all of the old case designs, it was usually only the motherboard tray and back panel that slid out, whereas here literally everything inside the case comes out as one complete unit.

For those who may be curious, here’s a shot of the case once the slide out portion has been fully removed.

Examining the case’s internal structure reveals a generous cutout in the motherboard tray as well as a removable bracket for mounting 2.5” hard drives/SSDs.

Meanwhile, the front reveals two removable 3.5” hard drive trays, which may be used to mount 2.5” drives and also include rubber spacers to help isolate mechanical drive vibration. As an extra bonus it’s worth noting that unlike some other cases, the drive holders in the Portal are made of metal and are not prone to having the front clips fail like their cheaper plastic counterparts.

Finally, there’s also a mounting bracket for a 120mm cooling fan, or a 120mm AIO cooler, which we'd recommend if you’re going to use this as a gaming case.

Next Page Hardware Installation, Evaluation, And Final Analysis
20 Comments Comment from the forums
Be In the Know