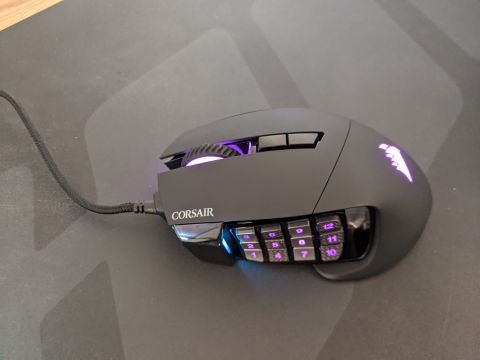 Solidly built and finished to a very high standard for the price, the new Scimitar Elite RGB offers a comfortable MOBA/MMO mouse with a lot of macro buttons. It won’t translate well to other genres, though.

The Corsair Scimitar RGB Elite is the third iteration of the Scimitar, after the original and Pro versions. In the attempts of being the best gaming mouse for MOBA/MMO gamers, it features 17 programmable buttons, including a 10-button grid on the left panel. A new PixArt sensor, a higher max CPI of 18,000 and a different mechanism for adjusting macro key positioning that involves a hex key are the primary changes.

Available for $80/£75 at the time of writing, it’s more expensive than the Pro (available for $50 at the time of writing), which arrived in 2017, but isn’t all that different beyond the sensor change. The price jump is even harder to justify when considering the inherently specialized nature of this mouse. You could feasibly use a first-person shooter (FPS) mouse in MOBAs or MMOs, but it’s a bigger stretch to take this wide, chunky model into a competitive shooter arena.

The first thing I noticed about the Scimitar is how wide it feels at a full three inches. For comparison, our favorite FPS mouse, the Razer DeathAdder Elite, is only 2.8 inches wide. With a textured area on the right side featuring a groove for your ring finger, the Scimitar has a different ergonomic feel to most gaming mice, and it’s a pleasant one. This is particularly true in palm grip, where the thumb falls into a proper position for accessing the bank of macro keys. You can easily position the bank in the center of its 8mm-wide housing or all the way to the left or right. The included hex key unlocks the bank for movement. But in any of its three locations, the macro bank is still obviously intended for a palm grip style rather than a claw.

As usual with Corsair gear, the materials feel premium and durable, from a pleasantly tactile matte finish across the buttons and palm rest to the smaller gloss plastic details below the left mouse button (LMB) and on the CPI profile cycle buttons south of the mouse wheel. There are also flashes of brushed aluminum on the underside, surrounding the PixArt PMW3391 sensor (perhaps to keep the weight distribution centered) and behind the macro bank. A Corsair logo breaks up the otherwise clean lines of the rear, and “Corsair'' written on the edge of the LMB adds another dash of branding. This is the most aesthetically pleasing mouse in Corsair’s current lineup, benefiting from fewer textured finish areas than the current Nightsword and Dark Core models.

The usability of that macro bank is questionable, however. While it might seem like a great idea to have so many buttons close to your thumb, the execution leaves the door open for pressing more than one button simultaneously or losing my orientation and having to look away from the screen to find the desired button. To combat those issues, the rows of buttons are textured alternately, two rough and two smooth. That certainly helps but doesn’t make the inherent problems associated with asking your thumb to be so agile go away. That's especially true for those of us whose thumbs are on the wide side. Since the buttons are programmable, you can circumnavigate potential accidental presses by simply spacing out the macro bank buttons performing in-game functions, but that begs the question: Why have 10 of them in the first place?

There are four RGB zones: the front, mouse wheel, macro bank and logo. You can customize each zone individually, and the end result’s not as distracting or gaudy as with many gaming mice on the market. The logo and numbers on the buttons come through pin-sharp, with RGB lighting coming through them too, speaking to this Scimitar RGB Pro’s build quality.

Since Corsair built the Scimitar for the MOBA arena, I took it for a spin in Dota 2, where it was comfortable for long sessions. That broad design and ring finger indent really proved valuable during longer matches, reducing the potential resistance of my two outside fingers trailing on the mouse mat by encouraging all fingers to sit across the front. It was easy enough to assign macros to abilities or even buy commands using Corsair’s iCue software, but I still didn’t feel totally confident when trying to find one button amidst a sea of them. I had more luck by using the textured rows only. The very bottom buttons -- 1, 4, 7 and 10 -- are especially tricky because they force a change of grip to reach. And this was true whether the bank was pushed all the way to the front, back or in the center.

The new sensor boasts a higher CPI than prior Scimitars at a max of 18,000, and the mouse lets you to store three different profiles identifiable by a red, green or blue status LED, each with five different CPI levels. Although I defy anyone to actually use that incredibly sensitive setting in practice, I could feel precision and smoothness of the sensor down at 800 DPI, the lowest setting on the mouse’s default profile, too. The lift-off distance is also impressive when set to “high” in the iCue software, but it’s hard to gauge an exact measurement since Corsair doesn’t provide an exact specification.

In addition to its MOBA cred, this is also a great mouse for long-form strategy sessions in the likes of Civilization or Total War and proved especially handy in the latter for grouping unit types using the macro bank. If you split your time between Machiavellian pursuits like that and digital audio workstations (DAWs) like the Ableton or Pro Tools software, you’ll find a use for those 17 buttons, too. I found them handy for DAWs when it came to assigning shortcuts like creating tracks.

And just for fun, I gave the Scimitar RGB Pro a run in CS: GO, too. Here, its three-inch width conflicted with the claw grip I prefer for this type of game. Plus, the macro keys weren’t more useful than a gaming keyboard here. This mouse not being an ideal FPS mouse isn’t a revelation, but it’s worth bearing in mind how specialized the Scimitar shape and button layout are.

Corsair iCue is the one-stop shop for all tweaks, RGB customization and CPI profiles with the Scimitar RGB Pro. This is also where you program the macro bank to do whatever you want it to -- just select one of the buttons, hit the record icon followed by whatever inputs you need and it’s saved.

It’s also as easy as ever to assign patterns and colors to RGB lighting zones. My review unit automatically took on a custom lighting pattern I had previously created for a different Corsair mouse when I plugged it in, a welcome -- if slightly spooky -- touch.

iCue’s surface calibration tool is always worth running. Once you begin the procedure, the software has you draw some circles at a set speed and then makes the necessary adjustments.

With iCue you can set six DPI profiles, each with three different sensitivity levels you can set. That's three more than the Dark Core RGB Pro, which targets FPS games, which doesn’t immediately make sense. CPI doesn’t seem more important in the genres the Scimitar targets than in shooters. So what gives?

Additionally, like with the other Corsair mice I’ve tested recently, there doesn’t seem to be anywhere to adjust the polling rate in iCue. Adjustments for angle snapping, lift height and enhanced pointer precision are all available in the performance settings, but no polling.

Corsair’s latest Scimitar performs admirably in its intended genres. It offers better quality than expected for $80, and you get a massive CPI range savable over multiple profiles. Additionally, you can easily adjust its handy macro bank to better fit your grip, although that grip will likely have to be palm style for the sake of comfort.

The mouse’s macro bank faces a common problem, however. With all the buttons so close together, it’s hard to easily hit the single button you desire, even with its differently textured rows. It also comes with a few minor software frustrations.

Outside of the MOBA/MMO world, this rodent will feel out of place, due to its shape and layout. But for its specialty, it’s a fundamentally well-built and sensibly designed mouse.