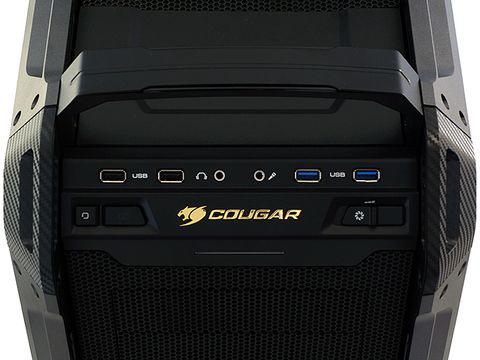 The Panzer Max is a nice gaming case, with good features, and it may have won an award if its current discount price ($140) had been declared permanent.

Many companies build up their mid-tower chassis to full-tower scale to entice experts of conventional logic. Convention claims that full-towers outperform mids in cooling and airflow, and a quick look at the words “full” or “mid” are often enough to win or lose a recommendation from that experienced friend.

Our experience has been quite contrary. The smallest case to hold a certain fan configuration usually has the best performance for that specific fan configuration. And that’s where Cougar makes its move: The fluff present on so many of its competitors is used in this case to provide additional fan mounting space between the chassis and outer shell, allowing users to put radiators where they would have normally placed fans.

The 22”-tall shell allows Cougar to graft the approximate shape of an oversized Jerry Can onto a standard 18” tall mid-tower and call it a full-tower. This, as opposed to just adding some 0.5” feet. The handles also make up part of the height: Although they are convenient, we wouldn’t go so far as to upsize our own naming convention to accommodate the height of grab handles.

The entire front panel is metal mesh, along with around 3/4 of the top panel, to provide optimal airflow. Better still, all three pieces (including the two-piece top) have push latches on two corners for instant installation and removal. Even the side panels use latch handles at the top and catch tabs at the bottom for easy access.

The front panel connector section features two USB 2.0 and two USB 3.0 ports, stereo jacks for your headset, a three-speed fan controller, and the obligatory power and reset buttons. The power LED is hidden within the power button, and the HDD LED flashes at the top of the face beneath a golden Cougar logo. These connectors and switches are angled 45° to ease use for both floor and desk placement.

The window of the left panel isn’t repeated to the right, since hardly anyone wants to show off their cables. From here we can see that the case has eight slots, which is a must for installing a (dual-slot) graphics card in a motherboard’s bottom slot, a 120mm exhaust fan, three knock-out plugs for cable or coolant line pass-through, and another quick-release side panel handle.

The Panzer Max has just 1.6” of space between the motherboard and metal chassis to support a radiator or fans. Fortunately, an additional inch of space exists under its outer covers, allowing users to place three 120mm or two 140mm fans within the gap.

Perhaps one of the Panzer Max’s greatest design weaknesses is that its bottom-panel dust filter is magnetic and prone to being dislodged if the case is handled roughly. Access also requires tipping the chassis, which is annoying to some users. Yet at least this filter is washable: Others panels have encapsulated mesh which is best cleaned using a vacuum cleaner or compressed air.

The same concession regarding fan space is also available on the front panel. The stock fans inside the chassis can be replaced with up to three fans within the gap between the outer shell and internal chassis. The big difference is that the front panel supports up to three 140mm fans, though any three-fan solutions require builders to give up the front-panel drive bays, which remain useful for things like the Asus OC Panel II.

The motherboard tray features a removable cable concealer that Cougar refers to as an air guide. It directs some of the air from front fans to the back of the motherboard and any drives mounted behind the board. The guide ends well below the removable 5.25” drive cage. Removing these parts would open up the case to accept full-EATX boards, though boards up to 11.9”-deep fit even with these parts installed. That is to say, the as-delivered Panzer Max supports the most common oversized enthusiast motherboard, which tend to be only 10.6” to 10.7” deep in spite of their “EATX” labels.

The power supply tunnel is nearly ingenious. It is supposedly removable by pushing in the two concealed barbs that the arrows point towards. In practice, you must first realize that a screw secures one of its upper slip tabs to the back of the motherboard tray, and fight to get the barbs released only after removing that screw. We found that pushing in one barb while hooking a finger around the nearest corner, then repeating this on the other side put a quick end to the removal struggle. Both the power supply tunnel and motherboard tray air guide have enough space behind the front panel to install radiators up to 1-3/8” thick.

The Panzer Max has maximized space behind the motherboard tray to support four 2.5” drives up front and two 3.5” drives mounted bottom-side-out. The 2.5” trays are angled toward the side panel to provide maximum airflow to any installed 3.5” drives, and the 2.5” trays have barbs (with thumb-release tabs) to allow tool-free installation.

Silicon-damped metal pins secure 3.5" drives to removable trays while reducing vibration transmission to the chassis. The 3.5” trays are also drilled to allow direct (screw) mounting of 2.5” drives. Thumb screws secure both the 3.5” and 2.5” trays individually to the back of the motherboard tray.

Next Page Installation & Configuration
9 Comments Comment from the forums