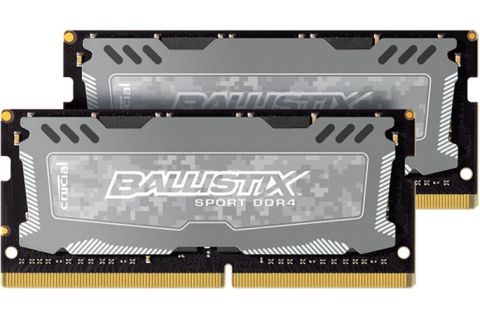 Ballastix Sport LT model BLS2K16G4S240FSD is a reasonably-priced performance memory kit for buyers who were already thinking of upgrading to 32GB. Alternatively, the performance benefit of DDR4-2400 isn’t large enough to win over system owners who weren’t already seeking a capacity upgrade.

Ballistix represents a line of DRAM from Micron/Crucial that offers performance enhancements which often exceed industry standards set by JEDEC. Automatic detection of these enhancements often comes by way of Intel XMP 2.0 technology, which are extended memory profiles added to the normal piece of flash that tells a motherboard what type of memory is in the slot (also known as the Serial Presence Detect IC). Because XMP settings often require extra voltage or add extra stress to the CPU's memory controller, this can often be referred to as a manufacturer-specified overclock.

Memory manufacturers have been specifying approved overclocks for a long time. XMP 2.0 and similar technologies just made it easier for users to set the changes. Yet unlike most XMP memory, Ballistix Sport LT DDR4-2400 doesn’t actually need any of those fancy workarounds.

Ballistix Sport runs at the stock DDR4 SODIMM setting of 1.20V, which means it doesn’t run hot and doesn’t even need heat spreaders. We instead find stickers that resemble heat spreaders covering its ICs. And, it’s rated at JEDEC-approved DDR4-2400 timings.

The best combination of programmed frequency and timings is seen on the left, as JEDEC #8 in this CPU-Z screen shot. The memory’s XMP-2400 value is the same. What this actually means is that Ballistix Sport has broader compatibility with various firmware limitations, since certain XMP-supporting firmware could potentially be old enough not to include the JEDEC specification for DDR4-2400. That doesn’t seem a likely scenario for most builders, but perhaps programmers felt that they’d rather be safe than sorry.

MSI supplied its Aegis X mini barebones PC review sample with some extra hardware, including a set of DDR4-2133 reference RAM manufactured by SK Hynix. Though this platform sets a reliable performance baseline by which Ballistix Sport LT DDR4-2400 can be compared, it does not support user-configurable memory adjustments. Increasing the memory data rate by increasing the base clock is also not an option, as Intel's XTU program shows a maximum 100 MHz BCLK.

That’s not to say there aren’t any adjustments at all. With a little prodding, we were able to get MSI to add an XMP button to its Aegis X firmware. The system still has no manual overclocking menu however, and not so much as the ability to choose from the memory’s rated settings. The Aegis X automatically chose the Ballistix Sport LT’s DDR4-2400 SPD value and would not even allow selection of one of the lower profiles of its SPD table.

Annoyingly, enabling XMP also enabled Enhanced Turbo mode, and there was no way to turn it off separately. Called various names by various manufacturers, this CPU overclocking technique forces the CPU to run more frequently at its highest Intel Turbo Boost multiplier. The Core i7-6700K, for example, is supposed to run at 4.20 GHz exclusively with single-threaded loads, yet Enhanced Turbo forced it to run at that speed with up to eight threads employed until the system finally throttled back due to thermal or over-current protection. This is the same technology that forced us to give up running XMP mode while benchmarking our desktop motherboards.