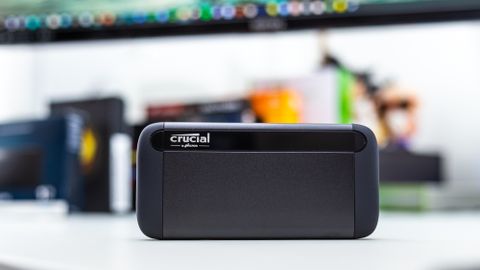 Today, we pit Crucial’s X8 against a variety of external products to gauge its performance. We have three high-end Thunderbolt 3 SSDs, the G-Technology G-Drive Mobile Pro, Samsung X5, and Plugable TB3 NVMe. Similar to the X8 with a USB 10 Gbps interface, we added in the Lexar SL100 Pro, a direct competitor. As well, we threw in the SATA based SanDisk Extreme and Seagate Backup Plus Ultra Touch for performance perspective.

Crucial’s X8 performed well when moving files. Read performance comes in at ~900 MBps when accessing our multi-gigabyte sized test files. When writing large movie and photo files, it traded blows with the SL100 Pro and almost halved the time the SanDisk Extreme, but lagged behind when writing the smaller files in the 25GB documents file folder.

With a total score of 5,036 points and average bandwidth of 374 MBps, the X8 lands right behind the Samsung X8 and ranks fourth place on this list. It also seems that the SL100 Pro is overshadowed by the X8 here. Crucial’s X8 is much more capable of responding to consumer workloads including video editing, photo manipulation, and game level loading. As we would expect, it absolutely destroys the HDD’s result as well.

ATTO reported peak sequential throughput numbers of 1,076 / 1,029 MBps read/write at a QD of 4. Overall, the performance is what you would expect out of a fast 10 Gbps device. It’s performance results per file size even ramp up faster than the more-expensive Lexar SL100 Pro.

Using iometer we measured peak sequential performance of about 970 MBps read/write or about one third the performance of Thunderbolt 3 devices. Random performance is very good too. The X8 scores second in random read at a queue depth of one and is faster than both the Lexar SL100 Pro and SanDisk Extreme.

Write speed and temperature are two important and inter-related metrics for external devices. We threw in this one last test to measure the performance of the drive over a 15-minute window, writing to the full span of the drive. This test reveals if the drive has a pseudo-SLC cache, which is a small portion of faster-programmed flash that absorbs incoming write workloads.

When tasked with some heavy writing, the X8 reveals its Achilles heel. While under ordinary use, the X8 will deliver a responsive performance of about 1GBps in both reads and writes, when hit with a heavy write workload, performance will suffer. Overall, the drive was able to write 197GB at a rate of 1,025MBps before write speed crashed down to an average of 100 MBps.

Like all SSDs, when the cache recovers, performance is back to business as usual. After 30 seconds of idle time, it was able to recover 18GB of write cache space and within a half-hour, it was completely empty and ready for more.

When moving around a few hundred GB of files with no airflow, the X8 hit a peak temperature of 45C on the exterior of the device. The SSD within reported a high of 53C.