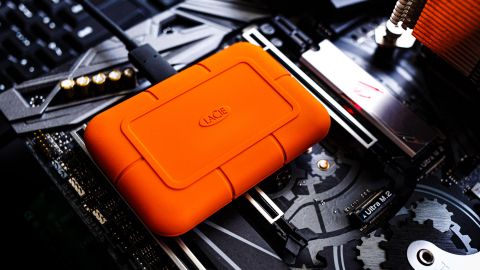 LaCie’s Rugged SSD is a fast, secure portable SSD designed to handle rough conditions on the go -- or a tough fall from your desk. If you’re in need of a professional portable SSD for work, it's a top pick.

LaCie’s Rugged SSD is exactly what the name implies: a rugged SSD. Built for the filmmaker or professional on the go, the Rugged SSD provides enough performance to let you transfer and edit 4K video quickly over a USB-C 10 Gbps connection. And aside from being fast, it also features convenient password protection to keep your sensitive data secure on both Windows and Mac systems, too. The main downsides? It's expensive and the included cables are short.

Moving around, backing up, and syncing a lot of media files, especially those RAW 4K videos you have taking up all your space, can be quite time-consuming. That’s what makes toying with (or testing) some of the latest 10 Gbps devices a pleasure and Thunderbolt 3 a dream -- at least with the quality ones that is. Drag, drop,  your task is done in a matter of moments and the drive is ready for more. Unlike those archaic HDDs that seem to take forever if you're dealing in gigabytes -- let alone terabytes.

We recently reviewed the SanDisk Extreme Pro, a quality built, fast external drive that goes non-stop after hours of hammering it with data. It's built using WD’s Black NVMe SSD and is a pretty sweet drive if you need that type of performance to keep up with your workflow.

But what if you want another option? Maybe one with a better encryption method that is hardware-based? Maybe you want something that's even more rugged and ready for the road. Or maybe you’re just a die-hard LaCie fan with money to burn? Either way, we now have the LaCie Rugged SSD, and it’s out to compete. With a similar formula to that of the SanDisk Extreme Pro, LaCie takes Seagate’s high-end PCIe 3.0 x4 M.2 NVMe SSD, the FireCuda 510, and packs it into the Rugged SSD’s fast and iconic Neil Poulton-designed enclosure.

Built with ruggedness in mind, LaCie’s Rugged SSD can not only sustain drops of up to 3 meters (10 ft), it can also endure a 2,000 kg (4410 lbs.) car running it over, according tot he company. It boasts an IP67 rating, meaning it packs dust protection and is capable of withstanding immersion in 3.3 feet of water for up to 30 mins without any harm. To top things off, this SSD comes backed by not only a 5-year warranty, but also 5-years of data recovery service if ever needed. Reliability is built into this SSD.

Both a USB-A to USB-C and USB-C to USB-C cables are included with the Rugged SSD. Measuring just 14 cm (5.5 inches), they're very short, especially for desktop use. Most competitors offer 9-12 inch cables that allow for more flexible positioning.

As bonus software, the company provides a complimentary one-month membership to Adobe's Creative Cloud All Apps plan, which is a pretty sweet deal if you could use it. But, most importantly, users will want to download LaCie Toolkit, available for both Windows and Mac-based computers. LaCie’s Toolkit allows you to manage the Rugged SSD’s AES 256-bit hardware encrypted password protection, as well as the ability to back up and sync your files effortlessly.

The drive can be used with encryption with no performance penalty. Enabling encryption took only a few moments following the application’s guidance. Once configured, the SSD will lock itself when ejected. When you plug it back in, you can only access a small 2-3 MB sized partition that contains a unlock app to enter your password on both Windows and Mac OSes. Or, you can use the LaCie Toolkit to enter the unlock password, too.

The SSD’s physical ruggedness is partially enabled thanks to the high-visibility orange rubber/silicone coating of the drive, but the shell is also a dust and dirt magnet.  While it is not recommended, we opened our Rugged SSD to see what else makes it so tough.

The ridged casing is what looks to be CNC’d aluminum, helping aid the hardware in cooling. The adapter PCB and SSD within are padded and packed with thermally conductive material throughout. Almost no component goes untouched, for consistent heat dissipation over the life of the device. The casing of the SSD snaps together and multiple internal clips retain the PCB and components within.

Communicating between the NVMe SSD and the USB interface of the host system, LaCie has opted for JMicron’s JMS583 NVMe-to-USB bridge chip. It's a USB 3.1 Gen 2 to PCIe 3.0 x2 bridge controller that supports S.M.A.R.T. data reporting, the Trim command, and the UASP protocol for high performance 10 Gbps operation with the FireCuda 510 NVMe SSD.

Additionally, this controller supports up to 8 channels, with four chips enabled per channel. In total, there are 32x 256Gb NAND flash dies, saturating the controller’s max capability. The dies are stacked into packages of 8 dies high, interfacing with the controller at 533 MT/s.