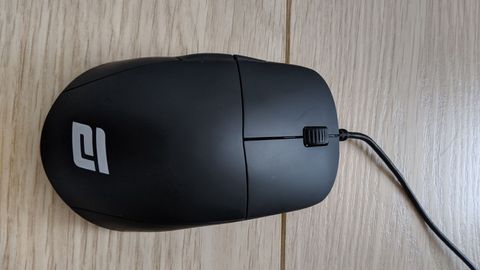 A versatile and attractively priced debut from Endgame Gear that will appeal to eSports-minded FPS gamers more than most, the XM1's flaws are minor and unrelated to its fundamental performance.

There are two opposing schools of thought when it comes to gaming mice. The first favors legions of programmable buttons, lighting options and wings that could easily have fallen loose from the Batmobile, often packaged with a feature-rich software accompaniment and a knee-buckling price tag. The other is all about stripped down performance, casting aside the aesthetic frills in favor of a simpler package promising eSports-grade performance and a wallet-endearing outlay.

It doesn't take much examination to figure out were the Endgame Gear XM1 lies: all-black, five buttons, no lighting and a top-of-the-line sensor. This is very much your minimalistic, high-performance gaming mouse.

The price falls right in line with that, too: available for $60/£54 it's an eminently affordable model. But German manufacturer Endgame Gear isn't a household name in PC peripherals, having only recently arrived to the market in 2019 with this debut model. It's only natural to fear the unknown, isn't it, even if Endgame Gear has a pro gamer endorsing the XM1 on its marketing materials (don't they all?) So is CS:GO pro Spiidi backing the right horse?

In short: yes. Endgame Gear has built a really competitive mouse here. The fundamentals are covered off expertly in the XM1 and what qualms we have are largely concessions to its affordable pricing. We can live with that.

It's hard to imagine what kind of unusually proportioned hand wouldn't find this ambidextrous, Microsoft intelliMouse-esque design comfortable. Endgame Gear says it's designed for claw, palm and finger grip, and that certainly holds weight in practice. It's probably best suited to a claw grip and could do with just a few extra millimeters at the back for the perfect palm grip feel. Essentially, this is a tried-and-tested shape, which will feel comfortable and familiar to all hands.

There are just five buttons, which means it's much more feasible as a FPS mouse than for MMOs or MOBAs. The layout of these buttons is the only element that isn't totally ambidextrous. The two thumb buttons are placed on the left edge, favoring righties. In addition to the exceptionally loud and clicky left mouse button (LMB) and right mouse button (RMB), there's a mousewheel with a stepped scroll and a push-in input. The flimsy feel of these buttons, including the wheel, represents a slight weakness in the XM1.  Since this is a superlight 0.2 pounds (70g) model, it's easy for the plastics used in construction to feel a little cheap and flimsy when you're clicking away. The heavier and broader LMB and RMB of my everyday mouse, Alienware's AW958 (0.4 pounds), feels much more substantial by comparison. Obviously personal preference plays a role, so it's not out of the question that someone else might prefer the lighter, clickier feel of the XM1. The same goes for the mouse wheel, which I found marginally too stiff. Some people do refer this clearly stepped feel though.

The XM1's looks are unlikely to be divisive, however. Finished in smart matte black with a single silver Endgame Gear logo at the rear, it's understated and means business. It doesn't easily display smudges or smears either. A dry grip coating ensures sweaty palms don't slip-slide around while using it.

On the underside, four sizeable white PTFE (like Teflon) glide pads give the XM1 a brilliantly responsive feel, particularly on harder surface mouse mats, while a single button cycles between four sensitivity settings spanning 50 counts per inch (CPI, sometimes called DPI) to 16,000 CPI. Placing the button on the underside means there's certainly no danger of knocking the button accidentally while playing, but with that stability comes the inability to quickly cycle sensitivity, such as in a sniping scenario.

Finally, a 70.9-inch (180cm) standard cable finishes off the package. It's an obvious point, but a braided cable would have been really welcome here. For one, when folded in the box there were slight kinks. But braiding's more fundamental than that. A mouse cable is the one cable on your PC desk that's constantly moving around and is therefore the most likely to snag on something or become impossibly knotted in that nightmare tangle of wires at the back of your machine. Braiding helps alleviate that. We get it--this is a $60 mouse, and costs have to be kept down somewhere, but we've used plenty of mice with braided wires within this price range.

A familiar sensor powers the XM1. It's the same Pixart PWM3389 found in Razer's Deathadder Elite, Naga Trinity and budget -friendly HyperX Pulse Fire FPS Pro, all both of which are currently on our best gaming mice page. So we're not surprised it's a brilliant performer in FPS games, offering low-latency precision at a wide gamut of CPI levels. We found the sweet spot quite low down in sensitivity though, between 500-3,200 CPI. Above that, I needed mouse smoothing to control the odd jitter and felt that much less in control.

My usual claw grip felt totally at home in Apex Legends with the XM1, and while it didn't turn me into a competition-standard e-athlete over night, it immediately felt natural and didn't harm my performances either. What really sets this apart from its contemporaries at the same price is how well it glides, though. Those PTFE pads are perfection, allowing pinpoint control even if you're getting clammy.

Somewhat surprisingly for a new company like this, the XM1 does have an accompanying software program called - wait for it - XM1 Config Software. We're impressed by it. The storage footprint's nice and small, and with a few clicks you're able to update the mouse's firmware, reassign button functions (especially handy for lefties) and change the sensitivity settings of each of its four color-coded stages. You can even tweak the lift-off sensitivity (how far you can raise the mouse above its surface before it stops responding) from the default 2mm to 3mm. The fact it's never occurred to me to even try and make that change before tells us it's probably intended for people far, far better at games than me.

Perhaps the most useful setting in this software suite though is 'ripple control.' By default it doesn't appear that there's any mouse smoothing at any DPI setting with the XM1. When I enabled ripple control and headed to MS Paint, its exponential smoothing noticeably kicked in. Again, this comes down to personal preference, so it's a smart move to put that control in the gamer's hands. All in all, it's a software package worth downloading.

Games with an eye on competitive play will -- and should -- be taken by the XM1. In any case, this is an exciting first move from an eSports-focused newcomer, and we can't wait to see what they roll out in future models.

For a more casual gamer, it's not quite comfortable or sturdy enough to consign my Alienware AW958 to the desk drawer. The inclusion of a braided fabric cable might just have been enough to win us over.

But for anyone serious about CS:GO, battle royales or hero shooters, the XM1 does everything you need it to and offers a smart array of tweakability in the accompanying software.