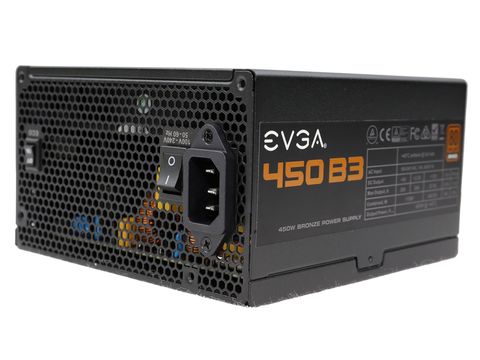 Super Flower is the reason why EVGA became so popular in the PSU market, and all of the company's B3 models are based on a low-efficiency Leadex platform (unofficially referred to as Leadex Bronze). Despite its entry-level efficiency rating, this platform has some serious potential. It utilizes a half-bridge topology on the primary side, along with an LLC resonant converter. On the secondary side, a synchronous rectification scheme is used for the +12V rail, while the minor rails are regulated through a couple of DC-DC converters. All filtering caps are provided by Teapo and belong to a respectable line, which helps extend the 450 B3's longevity. Teapo is a safe choice when cost considerations preclude the use of quality Japanese caps.

The design looks good. However, Super Flower apparently didn't choose its components well. We discovered this the hard way when the PSU blew up during our OPP evaluation process. This is a great shame, to say the least. Either OPP needs to be set lower or Super Flower needs to use components able to handle more amperage.

We found another problem, too: although the primary side was clearly shorted, the main fuse didn't blow. Thus, every time you connect the PSU to the mains network, you're treated to a fireworks show. Thanks to this platform's "special" feature, we were able to pull a nice prank on one of our lab engineers. See the video above.

We desoldered enough parts to identify all of the PSU's components and shed more light on the failure under overload.

The PCB right behind the AC receptacle doesn't hold any EMI filtering components. The entire EMI filter is installed on the main PCB and consists of three X caps, five Y caps, two CM chokes, an MOV, and a TVS diode. All in all, the EMI filter is complete.

An NTC thermistor protects against large inrush currents. Since this is a low-efficiency unit, Super Flower doesn't implement a bypass relay.

The APFC converter uses one AOTF14N50 FET and a single STMicroelectronics STTH8R06D boost diode. The bulk cap is provided by Chemi-Con and appears to be a special order from SF, since this is the first time we've seen a 95°C cap in a PSU. Lower-quality bulk caps fall into the 85°C category, while high-quality ones are rated for 105°C.

The primary FETs, two AOTF12N50s, are bolted onto a small heat sink. As mentioned, one of them died making lots of noise. The resonant controller is an SF29605 IC that likely handles the unit's protection features. On the same board that hosts the SF29605, there is also an LM339A Voltage Comparator, which supports the main supervisor IC.

On the secondary side, a couple of small heat sinks hold two AOT240L FETs, which regulate the +12V rail.

A couple of DC-DC converters generate the minor rails through the +12V rail. Each converter uses a NCP1587A PWM controller and two AON6516 FETs.

All filtering caps (electrolytic and polymer) on the secondary side are provided by Teapo. At least Super Flower went with a decent-quality line from the company (SY), rather than its cheaper SC family. That would have sacrificed useful life, for sure.

The 5VSB circuit is generated through a Mospec S10C60C SBR. The PWM controller is a propriety (and poorly documented) 29604 IC.

At the front side of the modular PCB, several Teapo electrolytic and polymer caps form an extra layer of ripple filtering.

The soldering quality clearly shows that this unit didn't come from Super Flower's manufacturing line, but from another factory (most likely RSY's). This doesn't surprise us. We know SF has limited capacity, so it has to enlist subcontractors for help with lower-cost PSUs to keep up with EVGA's demand

The fan's model is S1282412H. It measures 130mm across and uses a sleeve bearing. There is no room in this price range for a higher-quality fan, unfortunately. Its controller is the same as what we find in other Leadex platforms, and it is installed on a vertical PCB that'll snap off its base if you aren't careful with it.