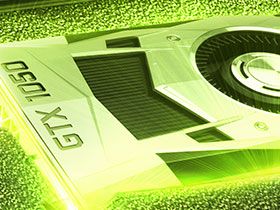 The software is set up to log the power consumption of graphics cards, storage devices, and CPUs. However, we’re only using the bricklets relevant to graphics card testing. Nvidia’s GeForce GTX 1050s get all of their power from the PCIe slot, while our Asus Radeon RX 560 requires a single six-pin auxiliary connector.

The card’s fan barely spun up (there is no semi-passive mode) and its GPU only got a little warmer than our ambient environment.

The built-in benchmark of Metro: Last Light Redux gives us a consistent sequence that can be looped as many times as needed to generate good data.

An almost-65W average landed well below the 1050 3GB's 75W total board power rating (though our peak power reading gets quite a bit closer at 72W).

Interestingly, although we observed an average current draw of 5.39A on the 12V rail through three runs of the Metro benchmark, there were some spikes that exceeded the PCI-SIG’s 5.5A ceiling. For comparison, check out the same data next to current draw from GeForce GTX 1050 Ti 4GB and GeForce GTX 1050 2GB:

Those two notable dips are indicative of brief pauses between test runs. Otherwise, the data clearly shows our GeForce GTX 1050 3GB sample pulling more current from the PCIe slot than it should.

The card’s fan speed does ramp up in response to increased thermal load, even though Nvidia’s GP107 processor never heats up much more than 65°C.

A more consistent workload is less susceptible to power consumption spikes (even if the task is as taxing as FurMark). GeForce GTX 1050 3GB doesn’t exceed 70W.

This time, average current draw of 5.58A does exceed the official 5.5A ceiling.

Again, putting all three GeForce GTX 1050s on one graph shows current draw from the 1050 3GB higher than it should be.

Voltage was pulled back to avoid violating Nvidia’s power limit, and core clock rate consequently dropped to about 1595 MHz. For comparison, the GPU voltage during our Metro run remained above 1.0V, and the core clock rate stuck right around 1771 MHz.

Comparing All Of The Cards

AMD’s Radeon RX 560 was easily the most power-hungry card in our gaming and stress test workloads. Between the GeForce GTX 1050s, though, Nvidia’s new 3GB card came closest to the company’s 75W rating (as you might have guessed from our current draw data).

GeForce GTX 1050 3GB also ran the warmest across both of our benchmarks.

Meanwhile, GeForce GTX 1050 Ti 4GB, with its 768 CUDA cores and 128-bit memory bus, doesn’t need to operate at aggressive frequencies to lay down better performance than the other two cards. It took a bigger clock rate hit in gaming scenarios to avoid violating its power limit.

FurMark makes each card’s respective ceiling much more obvious. Given their power limits, GeForce GTX 1050 3GB sustained roughly 1.6 GHz, the 1050 2GB was allowed right around 1.4 GHz, and 1050 Ti 4GB topped out around 1.3 GHz.

Prev Page Results: Rise of the Tomb Raider, StarCraft II, and The Witcher 3 Next Page Conclusion
21 Comments Comment from the forums
Be In the Know