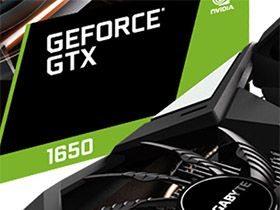 The mainstream graphics market is especially unforgiving. A few frames per second, a few dollars, a few watts of power consumption, or a de-featured encoder can sway comparisons one way or another. That’s bad news for Nvidia’s new GeForce GTX 1650. Depending on the card it’s up against, the 1650 can be made to look great or downright lackluster, which is a problem. The TU117-based GeForce shouldn’t come up so obviously short in any metric.

There’s no doubt that the 1650 is slower than Radeon RX 570. Worse, you can find the Radeon in 4GB trim for $20 less than the least-expensive 1650. We recommend stepping up to an 8GB Radeon RX 570 for a few bucks more. After all, even the higher-capacity version starts $10 cheaper than the base-level GeForce GTX 1650.

When you start eyeballing higher-end partner cards like our GeForce GTX 1650 Gaming OC 4G, Nvidia’s positioning really gets out of whack. Rather than spending $180 on the same class of card, why not spring for a Radeon RX 580 instead? Or, go with a GeForce GTX 1660 for $220. It’s a far better-performing card. This isn't the segment able to tolerate $10 bumps in exchange for a few more megahertz and RGB lighting.

One of GeForce GTX 1650’s biggest selling points is its 75W TDP, which makes entry-level Turing a great upgrade for office PCs without an enthusiast-oriented PSU. The card we tested is aimed at overclockers, so we weren’t surprised to discover that it requires auxiliary power. But we would have been far more impressed by a 1080p gaming card able to get all the current it needs from a PCIe slot. While we appreciate that Nvidia’s Turing architecture makes it possible to nearly match Radeon RX 570’s performance at half the power budget, the benefit of such a distinction is easy to lose on an expensive, factory-overclocked board configured to require a six-pin connector.

Prev Page Temperatures, Fan Speeds, and Clock Rates
11 Comments Comment from the forums
Be In the Know