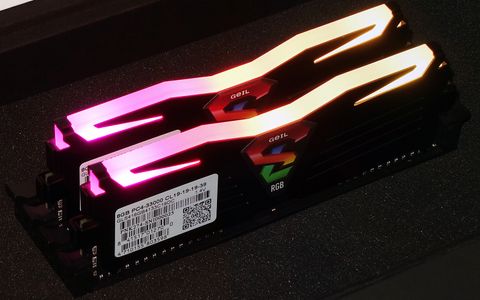 If you don’t mind its 1.40V setting or even adding a bit more to get it stable on some boards, the Super Luce RGB Sync DDR4-4133 offers great XMP performance at a moderate price.

Taiwan’s Golden Emperor International Limited (GeIL) puts itself back in the spotlight with DDR4-4133 rated at a mere CAS 19, pushing its latency-to-frequency ratio beyond expectations for a mere $240. That high data rate comes at a high voltage level, the dangers of which are probably exaggerated, given that Intel has already certified even higher-voltage parts. But speaking of extra voltage, that’s exactly what our test platform needed to make these modules stable.

Extreme memory kits get extreme ratings by blatantly violating Intel’s memory voltage precautions. The history on this is fairly short: In 2013, a bunch of companies released 1.35V UDIMMs using the previous DDR3L SODIMM spec, in preparation for Intel’s upcoming restrictions. Hardly anyone remembered that this memory existed two years later when Intel finally implemented those restrictions, but they did notice that 1.65V “Performance Memory” damaged a few CPUs. Overclockers quickly found that keeping the memory voltage within 0.50V of the memory controller was enough to stave off the damage, so the workaround memory was to increase the memory controller voltage to at least 1.15V.

Fast forward to today, where the ubiquity of DDR4 has made DDR3L a distant memory, and 1.35V is the most widely-accepted standard for the “performance” variations of this 1.20V standard. Intel has said that nothing exceeding 1.35V should be used, but includes memory with voltage levels as high as 1.50V on its own XMP Certification List.

GeIL’s Super Luce RGB Sync DDR4-4133 uses its 1.40V rating to boast 19-19-19-39 timings at its high data rate. Anyone who thinks that CAS 19 is outrageous at any data rate should probably do some math, as it results in similar response times to DDR4-2400 CAS 11. Latency is rated in cycles, and faster cycles take less time.

We already know that these are the venerable “B-Die” Samsung IC’s, and can derive from their DDR4-2133 default a K4A8G085WB-BCPB part number. While hardcore tuners can debate about why the better-rated BCTD (DDR4-2666) and BCRC (DDR4-2400) IC’s aren’t outpacing these in the overclocking arena, we’re simply interested in results that prudent readers can replicate.

Each DIMM is topped with a white light diffuser and covered in stamped-aluminum heat spreaders. The color we observed was slightly more vibrant than some of the other white-covered RGB kits we’ve tested, and this appears to be due to less opaqueness in the diffusers rather than any improvement to the LEDs beneath.

GeIL does not supply its own RGB software, instead relying upon the RGB suite available with compatible motherboards. Motherboards that don’t have an RGB suite are stuck with the kit’s unsynchronized rainbow scroll pattern.

As with most competitors, GeIL's DRAM carries a lifetime limited warranty.

We compared GeIL’s Super Luce RGB Snyc to our latest review samples. While the difference in XMP data rate appears unfortunate, the low latency of Trident Z Royal and Nighthawk Legend parts should at least put them in the running in regards to tuning capacity.

Consistency comes from the fact that the three top kits use the same Samsung ICs, so using the same voltage gets us, in most instances, the same minimum stable timings.

Programming is the biggest difference between the GeIL, G.Skill, and T-Force kits, where the DDR4-4133 comes with looser advanced timings. While our Asus motherboard does a reasonable job of compensating advanced timings for changes in frequency, the DDR4-4133 kit’s timings appear to be even looser than those the motherboard automatically applies to the two DDR4-3200 C14 kits. And so it hits a higher data rate, even when reduced to our standard 1.35V test voltage.

Before we go on to performance tests, we should note that the GeIL DDR4-4133 kit was not completely stable at XMP values on our motherboard. After first refusing to boot, our motherboard recovered by using its MemOK function to raise VCCIO and VCCSA to around 1.25V. When the memory still failed an extended stability test, we manually increased its voltage to 1.41V to completely cure the issue.

Unfortunately, the two DDR4-3200 C14 kits were our best performers when overclocked to DDR4-4000. The gains were minimal, but you can see them in the test results of our F1 2015 and 7-Zip File Compression benchmarks.

Priced at $240 when we wrote this, the Super Luce RGB Sync DDR4-4133 was only $14 pricier than the T-Force Nighthawk Legend DDR4-3200 C14, and around $50 cheaper than the Trident-Z Royal DDR4-3200 C14. Of course, the Royal’s price reflects a specific aesthetic treatment that has no bearing on performance.

Our value chart seems to indicate that your best option would be to sacrifice a little performance with the Adata DDR4-3200 C16 kit and save a bunch of money. But since you’re not willing to sacrifice any performance, your next best option appears to be purchasing a DDR4-3200 C14 kit and overclocking it to its limit. But there are no guarantees in overclocking…unless the overclock you seek comes stock as an XMP value. But even then, the XMP voltage of this memory did not make it stable at its rated data rate, at least on our motherboard.

Our previous testing showed that the Team Group kit only performs well on Asus boards, and with the G.Skill kit’s pricing issue, perhaps the best option for people who want maximum performance at middle pricing isn’t even listed. But if you want a kit that’s guaranteed to run DDR4-4133 and don’t care about the extra voltage needed to get it there, the GeIL Super Luce RGB Sync DDR4-4133 gives you a high data rate for its middle price.