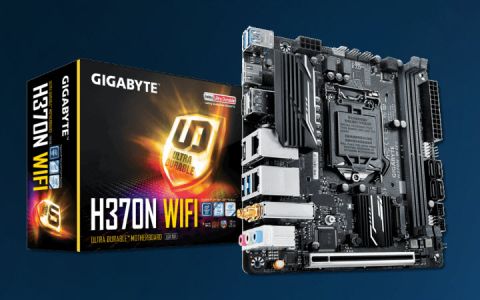 Gigabyte’s APP Center remains launch point for its applications and shortcuts/applets, with the H370N WiFi differing from its “Aorus”-branded siblings in application color scheme. The H370N WiFi’s suite loses Gigabyte’s BIOS Tuner, Color Temperature, and DAC Up software compared to its previously detailed Z370 Aorus Gaming 7 suite. The later program is missing because this board doesn’t support fine tuning of USB voltage.

Gigabyte EasyTune doesn’t provide much room to manipulate CPU parameters when paired with the H370 PCH, but users can still underclock for increased efficiency at far lower voltage levels if they wish.

The RGB Fusion lighting control is limited to the board’s short strip of LEDs that follow its front-panel audio connector, plus the two RGB headers (RGBW and addressable LED).

Gigabyte’s M.I.T. firmware menu is copied from its Z-series boards, but many of the individual settings are either removed or extremely limited due to H370 restrictions. Host Clock (CPU Base Clock) for example is grayed out, and our unlocked CPU can’t be set any higher than its default 40x multiplier.

DRAM data rates are limited to DDR4-2666 by the chipset, and capped even lower to DDR4-2400 by our chosen CPU. Performance seekers are still welcome to tighten timings for quicker response, and the board even offers users the ability to group channel timings (manual timing mode) or address each channel individually (advanced manual mode).

Power settings such as CPU Loadline Calibration, which attempt to normalize internal voltage as loads are increased, are designed for overclocking methods that the board's chipset blocks. Gigabyte includes those anyway, in addition to extended CPU, PCH, and DRAM voltage adjustments that reflect the overclocking capabilities of other Gigabyte boards.

Gigabyte breaks its system monitor and fan controls into two menus, the later allowing manual five-point curves to be set in addition to automatic fan profiles. All three fan headers can be switched between PWM and voltage-based RPM control.

A simplified version of RGB Fusion is found within the firmware GUI’s “Peripherals” menu, enabling lighting adjustments without reliance on the Windows application.

Our first firmware image showed menus that pop in from the bottom and left edges when the mouse is pointed there. One of the bottom-edge options lets you switch to Easy Mode GUI. Fewer settings are available here, but at least it looks nice. Since Easy Mode isn’t actually easier to use, we applaud Gigabyte for defaulting to its Classic Mode interface.