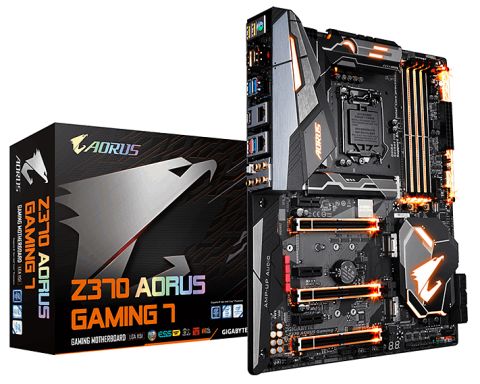 As part of an audio upgrade that includes a high-end ESS DAC, the Z370 Aorus Gaming 7 includes Creative’s SoundBlasterX 720° suite. Various audio manipulations include increasing the noise of your opponent’s footsteps, and it even includes a radar app to visually indicate the direction of their approach.

Gigabyte App Center remains the tray-residing menu for its collection of applications.

Gigabyte RGB Fusion worked perfectly on the Z370 Aorus Gaming 7, providing full color and pattern control for the various lighting groups on board. It can even be programmed to respond to system events rather than follow a fixed routine, if desired.

Gigabyte’s Smart Heads-Up Display provides an overlay of prerecorded videos atop gameplay videos, which could come in handy for following tutorials or previously optimized paths through the game map.

Gigabyte System Information Viewer starts the first time in an automatic fan tuner that’s laggy to cancel out of and will continue to pop up until the you finally let it do its thing. Its “thing” is to modify three of its four fan profiles to match your cooling configuration. The fourth profile, “Full Speed,” needs no tuning.

Gigabyte SIV also lets you set your own fan profiles manually, enable and alter various system event alerts, and record system events. An icon in the upper corner flips the app from console mode to a hardware monitor that consumes the entire right edge of your screen.

In the image above, I split the hardware monitor screen shot so it wouldn’t be as tall as your screen, placing the two halves so that its entirety would fit inside your view window. Hardware Monitor is also available from Gigabyte’s Easy Tune software, but clicking its “back” icon will always take you to its System Information Viewer menu.

Remember the OC button? Gigabyte EasyTune also includes that function using its software interface. And while the OC button cancels out at reboot, the software’s OC mode can be set to enable following a restart. Users are also allowed to program their own overclocking profiles, save them, and choose whether or not these should be automatically applied.

We confirmed Easy Tune’s ability to alter CPU multiplier, base clock, and voltage on the fly, but any changes to the memory configuration cause the program to force a reboot. Unlike DDR data rates, the DDR timings menu bars are greyed-out (non-functional).

The Auto Tuning algorithm of Gigabyte Easy Tune also took us to 4.90 GHz, but detected that our core needed 1.36V to run this frequency. That’s important, as Prime 95 threads 7 and 8 crashed using the default OC profile’s 1.30V CPU core.

The Z370 Aorus Gaming 7’s firmware opens by default to the M.I.T. menu of advanced mode, which is a launching point for overclocking sub-menus. Moving the mouse to the right side of the screen also shows current voltage and frequency settings.

The Advanced Frequency Settings menu is primarily for CPU overclocking, though it includes a memory multiplier made redundant by the Advanced Memory Settings menu. We were able to push our Core i7-8700K to 4848 MHz using a 101 MHz BCLK at 1.30V CPU core, whereas the auto-tuned 4.90 GHz at 1.36V caused our system to thermal-throttle after a few minutes of full Prime95 load.

Factory-included overclocking programs for our Core i7-8700K (pasted from a second screen shot so you could see what was behind that menu) included 4.80 GHz at around 1.36V, 4.90 GHz at around 1.38V, and 5.00 GHz at 1.42V. Given our inability to keep our cores consistently below throttle temperature at settings above 1.30V, we had to pass.

The M.I.T. “Advanced Voltage Settings” sub-menu is yet another launch point for menus that control various CPU, DRAM, and on-board component voltage levels. Our CPU required a VCore Loadline Calibration setting called “Turbo” to maintain its 1.30V when stressed with 12 threads of AVX-enabled Prime95.

Gigabyte’s decision to use 10mV steps for DRAM regulation is slightly unfortunate, as the 1.350V setting was measured as 1.357V at the slot. Given that certain manufacturers have used enormous amounts of cheat-voltage (aka, unreported overvolting up to 30mV) in past samples, we had to set a hard-and-fast limit of 1.355V (measured) to keep the competition fair. And that meant setting the Z370 Aorus Gaming 7 to 1.340V.

I prefer to make my fan settings in firmware, and Gigabyte obliges with a Smart Fan 5 menu that lets me set both the control mode and my own fan profiles to each fan header.

Launched from its “Peripherals” firmware menu, the firmware version of RGB Fusion provides a reduced set of controls for its on-board lighting and LED headers.