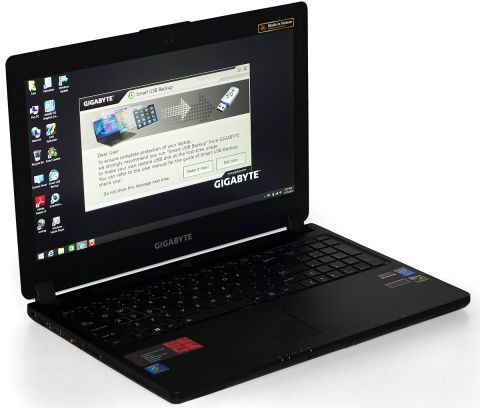 Size matters when it comes to rating performance, because a larger chassis accommodates additional cooling and the higher-performance parts that demand it. This puts Lenovo’s more entry-level Y50-70 in a tough spot, since it’s the closest match to Gigabyte’s even smaller P35X v3. Yet, the Y50-70 also costs half as much as the P35X v3, so our biggest question is whether the expensive Gigabyte notebook could possibly be worth twice as much.

The short discussion above dispenses with our regular benchmark tables, but these can still be examined in our Lenovo Y50-70 review.

A pure price-to-performance article would look for Gigabyte’s P35X v3 to double the performance level of Lenovo’s Y50-70. It accomplishes far more than that in 3DMark, though we generally don’t use synthetic benchmark in our value calculation. The one synthetic we do use is PCMark Storage, where the P35X v3’s striped pair of mSATA SSDs handily trounce the Y50-70’s hybrid drive.

The P35X v3’s CPU is only one model higher (100MHz) than the Y50-70’s, so it can’t double the cheaper machine’s Arithmetic or Cryptography scores. Dual-channel memory does yield twice the bandwidth, but we really need to lean on graphics benchmarks to prove the P35X v3’s worth.

Unlike fixed-frequency battery-saver mode, Nvidia Battery Boost modulates GPU frequency to provide a target frame rate at the lowest possible power consumption. Though this sounds like a great way to conserve battery power, the technology actually increases power consumption in situations where the old method failed to produce playable frame rates. We left the original 30 FPS target in place.

Both notebooks have no trouble producing Battery Boost’s 30 FPS default target in battery mode, and both are significantly faster when powered from the grid. Unfortunately, the similarly-capable CPU limits the more expensive Gigabyte model to an approximate 50% performance lead.

The difference in graphics capability is brutally illustrated at 1920x1080 and Ultra quality, where the Y50-70 can’t even maintain 30 FPS when plugged in! The P35X v3 sails through that setting unscathed, pushing a smooth 30 FPS off the battery and nearly twice that number attached to the wall.

Gigabyte’s P35X v3 starts off with twice the performance of Lenovo’s Y50-70 at our lowest Battlefield 4 settings, and only gets better from there. By the time we reach 1920x1080 and Ultra quality, the Y50-70 can’t even stay above 30 FPS when plugged in.

The P35X v3 stands out with true on-battery gaming performance at 1920x1080, while using Battlefield 4’s Ultra quality defaults. Though the Lenovo Y50-70 doesn’t quite reach its 30 FPS target, the chart does show how Nvidia Battery Boost is able to approach plugged-in performance levels as-needed from battery power.

The P35X v3 is already topping twice the performance of the Y50-70 at our “lower” quality setting in Far Cry 3, and its GeForce GTX 980M pushes it further as we add greater graphics detail.

Amazingly, our observations concerning Battery Boost in Battlefield 4 don’t apply to Far Cry 3, at least not for the GTX 980M-equiped P35X v3. While the Y50-70 struggles to achieve similar-to-plugged game performance from its battery, the P35X v3 drops its performance by half—regardless of the 30 FPS target—and only in this title.

The P35X v3 takes a sizable lead in non-gaming applications, and that lead is most noticeable in apps that rely primarily on either GPU capability or DRAM bandwidth. Beyond those general observations, Adobe After Effects is particularly responsive to memory capacity, where the P35X v3 has twice as much (16GB) as the Y50-70 (8GB).

Prev Page P35X v3 Hardware And Software Next Page Energy, Efficiency And Verdict
18 Comments Comment from the forums
Be In the Know