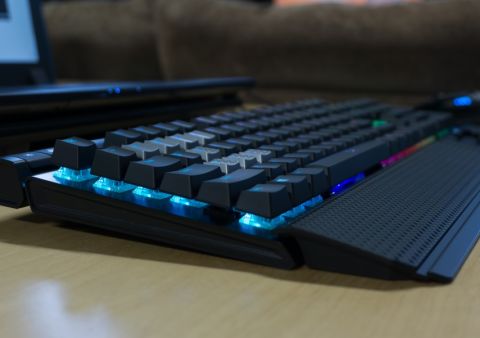 If you need a light bar on your mechanical gaming keyboard but don’t want or need extra macro keys, the HyperX Alloy Elite RGB is a high-quality option. But competing options feel more polished overall.

HyperX, a subsidiary of desktop memory giant Kingston, is actively following the path into the peripherals market that was paved by the company's well-received line of headsets--the HyperX Cloud Alpha is our current pick for best wired gaming headset. The Alloy Elite RGB keyboard (which appears to have gone by the codename “DartFrog” internally at the company) is the company's fourth keyboard and current flagship, designed to compete with the likes of Corsair and Razer in the high-end gaming keyboard market. Models like the K70 LUX RGB and Blackwidow Chroma V2 are set squarely in the Alloy Elite RGB’s sights.

A $170 price tag actually puts Elite RGB in a slightly higher price tier than the K70 RGB or Chroma, but its full-size 104-key layout doesn’t compete with keyboards like the K95 RGB Platinum (which has an extra bank of macro keys). The Elite RGB offers mostly the same features as its competitors, with one exception: its RGB light bar, which adds color to a bezel area that is bare in most mechanical keyboards. (Even that appears on some other higher-end boards these days, though.) There are also dedicated media buttons, game mode/lighting mode control buttons, a few Cherry switch options, and a much-appreciated metal volume roller.

You also get a spate of features that are present on most higher-end gaming keyboards, including Windows key lock modes, macros, and per-key RGB programmability. Macros are often useful in solo games and design software, but it surprises us that so many brands lean on them as a feature meant for competitive online gamers. In most ranked or scored titles, macros are banned (or at least frowned upon).

The only feature that feels out of place here is the USB 2.0 passthrough port. It’s an improvement over the Alloy FPS, which could only charge devices via USB, but an upgrade to USB 3.0 would be ideal. USB 2.0’s 500 mA maximum current isn’t optimal for charging phones and other high-demand devices. USB 3.0, on the other hand, offers 900+ mA of current.