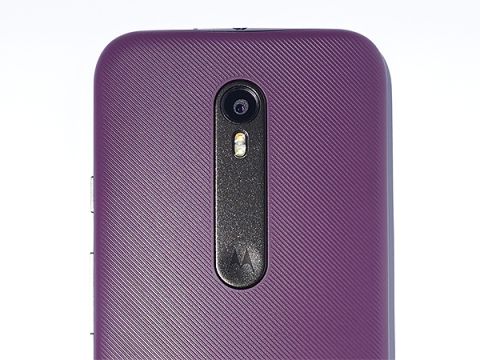 The Moto G (3rd gen) is a significant upgrade over the previous generation in every way that matters. Battery life is excellent and it comes with some of the best cameras available for its price. System performance is good, but hardcore gamers will be disappointed. The bright display shows accurate colors, but a grainy coating degrades the “painted on” illusion.

Motorola discovered a winning formula when it released the original Moto G in the fall of 2013. Based on stock Android and free of the bloatware that usually clutters the app drawer, it offered a compelling user experience for less than $200. At the time, roughly similar devices in terms of features and performance, such as the Samsung Galaxy S4 Mini and the HTC One Mini, started out at well over $300.

While it was a good bargain, the original version was not perfect. One of the main criticisms was that it did not support LTE. About half a year later, in the spring of 2014, Motorola updated the Moto G to support LTE, removing this deficiency but adding $50 to the price. The updated version also brought microSD support, another much requested feature.

In the fall of 2014, the company launched the second-generation Moto G, which improved the cameras and bumped the screen size from 4.5-inches to 5-inches. The larger screen, however, led to a decrease in battery life as the battery size remained the same as the original. It also used the exact same Snapdragon 400 SoC at a time when other phones were moving to the 64-bit Snapdragon 410. This oversight made the Moto G (2nd gen) a harder sell, especially when Motorola launched the Moto E (2nd gen) in the spring of 2015 with the higher-performing Snapdragon 410 at a lower price.

The new third-generation Moto G fixes many of the issues it experienced during its sophomore slump. For starters, it now supports 4G LTE in its base configuration. It also gets upgraded to the Qualcomm Snapdragon 410 SoC, which has four 64-bit Cortex-A53 CPUs and an Adreno 306 GPU.

Sticking to a 5-inch 720p IPS screen makes the Moto G easy to use with one hand and small enough to slip into a pocket. The overall dimensions are up slightly, including the thickness, due in part to a larger battery that increases capacity from 2,070mAh to 2,470mAh. In theory, this should more than offset the higher power draw of the A53 cores and give the new Moto G an overall increase in battery life.

Motorola makes a few other hardware improvements too, especially to imaging. The rear camera gets a dual-LED flash, for more natural-looking colors in low light, and now uses a 13 MP Sony IMX214 Exmor RS sensor, the same sensor used in the Nexus 6 sans OIS. Around front, camera resolution increases to 5 MP. It also gets IPX7 certification for improved water resistance.