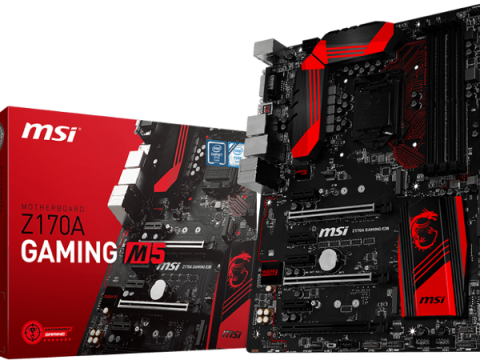 MSI “Gaming App” applies a minor underclock (Silent Mode) or major overclock (OC Mode) in a single click. You’ll be forced to reboot to get that overclock, but the system then pushed our processor to 4.80 GHz at 1.40V. Not wanting to reduce this Core I7-6700K’s life as a review sample, I moved on without further testing.

A description of additional Gaming App functions can be found in our Z170A Gaming M7 Review.

The easy-to-measure CPU core and DIMM voltage adjustments work well, but a change in DRAM timings requires a reboot, and after altering timings, its menu becomes slow to open.

Following several generations of minor changes, MSI’s Click BIOS 5 is finally proportioned so that it’s easy to read settings menus in advanced mode. Capable of up to 4.60 GHz at 1.30V CPU core, our Core i7-6700K reached 4545 MHz on the Z170A Gaming M5. The missing few MHz of stability resulted from a voltage regulator that “drooped” to 1.28V even after enabling its “CPU Core Voltage Compensation” setting.

Most motherboards run a little extra DRAM voltage if only to produce better stability with less-stable memory. MSI isn't the worst offender, as its 1.330V setting produced 1.349V at our DIMM, and was even reported fairly accurately at 1.344V.

Other menus include a report of the memory’s on-chip programming, an advanced fan controller, and an OC Profiles menu with six registers plus USB storage.