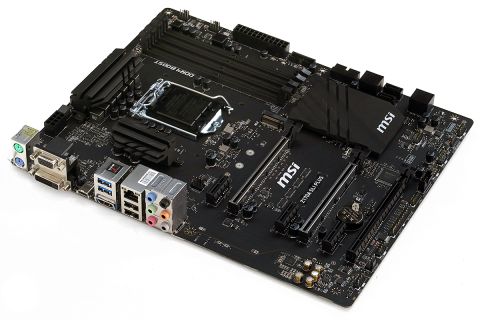 To assure accurate comparisons, we repeat the benchmark configuration from our initial Z170 roundup in every Z170 motherboard review. The Fatal1ty Z170 Gaming K4's performance and overclocking capabilities are compared to previously-reviewed $115 to $160 Z170 motherboards.

MSI's Z170A SLI Plus competes most directly with ASRock's Z170 Extreme4, since both are low-cost overclocking boards. MSI's product is currently a little cheaper. Both of these are bracketed by the ultra-low-cost Z170-HD3 and the mid-priced Z170-Claymore.

Synthetic benchmarks highlight small performance differences that aren't typically visible in real-world applications, but there's not much to see until we reach Sandra Memory Bandwidth; there, one of MSI's competitors stands out as being slightly behind the pack.

Another of MSI's competitors falls slightly behind at a couple specific game settings, and again we see the Z170A SLI Plus performing as-expected.

There aren't any noteworthy exceptions in timed workloads either. That leaves features and overclocking as the drivers of our value analysis.

Employing the full benefits of Intel's power-savings technologies requires us to enable various settings in firmware, particularly when we're reviewing boards that are designed for overclocking. Fortunately, we did that for all samples before running the performance analysis. That means the power savings in MSI's Z170A SLI Plus should lead to true efficiency.

With a 0.1 percent above-average performance ranking and 10 percent below-average power consumption, the Z170A SLI Plus comes out 11.7 percent above-average in efficiency. We should note that the efficiency rankings seen here use the average of all fourteen Z170 motherboards we've reviewed, not just the four closest competitors shown in the charts.

The Z170A SLI Plus is tied for first place in sub-$140 Z170 motherboard overclocking, matching the similarly-priced Z170 Extreme4. ECS's pricier Z170-Claymore isn't really optimized for overclocking, and the far-cheaper Z170-HD3 doesn't have the voltage stability needed to add that extra 1 MHz BCLK at a 45x multiplier.

One thing that isn't represented in the numbers is overclocking experience. The Z170A SLI Plus reboots several times upon every overclocked boot, and this reboot cycle can take over a minute before a boot is finally successful. Because of this, we'd probably choose a lower multipliers and let software (such as MSI Command Center) increase the base clock if we wanted our system to boot up quickly.

Some motherboard manufacturers use slow tertiary timings to allow memory overclocking, which spoils the reasons for memory overclocking. Fortunately, both the Z170A SLI Plus being tested today and the Z170 Extreme4 it's being compared to produce good bandwidth numbers at non-reference settings.

As of this writing, the Z170A SLI Plus is available for $130, while the Z170 Extreme4 can be found for $135. That $5 difference gets buyers of the competing board an extra firmware ROM that's both manually selectable and socket mounted for easy replacement, plus a two-digit system status display that eases the diagnostic of overclocking failures (among other things). Those prices also include a temporary discount on the competing board, but do not include that competitor's $10 mail-in-rebate. If we were to buy this on another other day they'd probably be a little farther apart in price, giving both products similar features-per-dollar. Both are worth your further consideration, and both get the same stamp of approval.