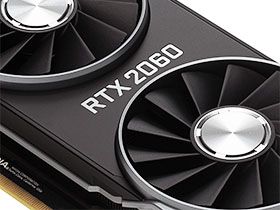 Up top—where RTX 2080 Ti, 2080, and even 2070 live—Nvidia is the only name in town. Its prices reflect this. If you want to play up in that league, you have no choice but to pay the company’s 'luxury tax.

In short, it’s not enough for GeForce RTX 2060 to replace a Pascal-based card at the same price, add RT cores and tell enthusiasts that the games are coming soon. No, GeForce RTX 2060 needs to be faster and cheaper than the competition in order to turn heads.

The other interesting take-away from the launch is that Nvidia’s hybrid rasterization/ray tracing approach is still viable down at the 2060’s price point. As far back as our first deep-dive into the Turing architecture, we wondered how useful 36 RT cores would be on TU106 compared to TU102’s 68 RT cores. Now, we have a derivative GPU with just 30 RT cores, and it’s capable of over 60 FPS at 1920x1080 with all options, including DXR Reflection Quality, set to Ultra in Battlefield V. No doubt, that’s a testament to EA DICE and its optimization efforts, which continue in the form of an upcoming patch to enable DLSS support.

Still, we don’t draw conclusions based on what might happen down the road. Fortunately for Nvidia, RTX 2060 is generally faster than much more expensive cards in today’s games. Its 160W TDP does correspond to that higher performance. But it’s also still significantly more efficient than AMD’s Vega 56. We’re relatively confident that RTX 2060 Founders Edition, specifically, will see limited availability on geforce.com. Once it’s gone, Nvidia’s board partners need to keep prices close to the $350/£330 benchmark or else risk being undercut by very real competition from AMD and Nvidia’s previous generation.

Prev Page Temperatures and Fan Speeds
Be In the Know