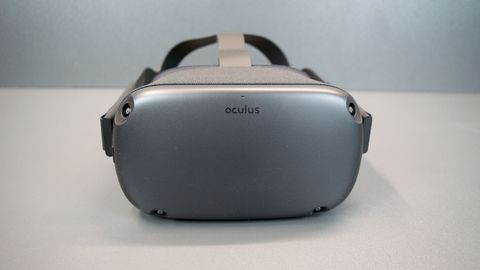 Let's Go on a Quest

Convenient, but not as Comfortable

The head strap on the Quest is like the Rift with spring-loaded retention arms that allow you to keep the straps in place when you remove the headset. Quest also incorporates semi-rigid, rubber-like material for the head strap, which is flexible enough to squeeze into a small bag and sturdy enough to balance the weight of the visor. Oculus redesigned the rear of the strap to fit people with large heads, but that seems to have come with a compromise on comfort. The strap on the Rift is much more comfortable on my head.

Before you can play games on the Quest, you must configure the device. This includes pairing the headset to your smartphone, connecting it to your local wireless network and calibrating your play space for safe operation.

When you first pull the headset out of the box, it should have a charge on the battery, but Oculus recommends that you give it a full charge before you do anything with it. It’s also a good idea to keep the headset plugged-in while you run the initial setup because there will be firmware updates to download before you can use it.

Next, you install the Oculus mobile app on your smartphone. It's available on the Apple App and Google Play stores. Once you have the app running, open the settings tab and select Pair New Device. If the headset is within proximity, you should see it listed in the app. Bluetooth must be on to connect to the headset. Look through the lenses on the Quest to retrieve the pairing code.

Once the headset is paired to your phone, you can enter your Wi-Fi password to connect the headset to the internet. If the headset requires updates, you'll be prompted to install them.

The companion app lets you make changes to the headset’s settings, including adjusting power setting and switching the headset to developer mode. From here, you can also change the language or perform a factory reset on the device.

One of the most significant advantages of the Quest headset is its easy configuration process. Unlike the Rift, which requires precise placement of multiple tracking cameras and usually numerous attempts at tracing your space to get it right, the Quest has a straightforward process.

When you first put the headset on in a new environment, instead of a virtual world you’ll be presented with a black-and-white view of your real environment, fed to you through the four cameras on the front of the headset. This view has depth, unlike the monochromatic view that you get with the HTC Vive’s single camera. However, the fisheye lenses on the Quest’s cameras somewhat obscure the perspective, so objects appeared unnaturally distant when I reached for them.

If the headset doesn’t recognize the space, it will ask you to configure the Guardian barriers. First, you must confirm the floor height. If it appears off, select the reset button and reach to the floor with one of your controllers.

Once the floor height is assigned, you can proceed to trace the safe play space. With the Rift, you would carry the controller around the edge of your play area. With the Quest, you stand in the center and point at the edge of your floor space to map the safe zone. And that’s it! The process took me less than five minutes to complete.

The Quest can store up to five Guardian spaces, so you can move the headset between locations without re-calibrating it every time. I tried two spots in my home, and the headset remembered each space and where the Guardian barrier should be. All you need to do is scan the area with the headset to enable it to detect the topology of the room, and the Guardian configuration loads.

Last year, Oculus rolled out Oculus Core 2.0, which featured a redesigned Oculus Home environment with a new storefront, library and settings console. The Oculus Quest leverages the same software environment, so anyone familiar with the Rift platform should feel right at home in the Quest environment.

Oculus said that by the time the Quest ships in the third week of May, there should be 50 titles to enjoy. These include familiar and popular titles like Superhot VR, Space Pirate Trainer, Beat Saber and Dead and Buried II. I tried out all four of these titles on the Quest and was pleasantly surprised by how similar they are to their PC counterparts.

The differences between the two versions of Superhot VR and Beat Saber are so minute that they are nearly imperceptible. Both games run smoothly, and I did not notice any dips in the frame rate even when I moved around rapidly in Superhot VR or swung my arms violently with a fast-paced song in Beat Saber.

Space Pirate Trainer is one of my favorite VR games, and I’ve played hours of it on all available platforms. I’m delighted to say that Space Pirate Trainer on Quest is the same game I’ve become accustomed to on all VR platforms. Game studio I-illusions had to reduce the texture resolution to keep the performance up to par, but the game is otherwise identical to the original version.

Creed: Rise to Glory is also virtually the same game as the desktop variant. The texture resolution appeared to be reduced, and it may lack a few shaders to liven the graphics, but the graphics trade-off was well worth the freedom to move around unrestricted by cables.

Up to 3 Hours of Runtime

The Oculus Quest features an internal Lithium-Ion battery pack that cannot be removed, so you won’t be able to keep extra charged batteries on hand. Oculus hasn't disclosed the mAh rating of the battery, but said you could expect between 2-3 hours of use depending on what you’re doing. Room-scale gaming will be on the lower end of that estimate,  while watching 360-degree videos or using the virtual theater to watch 2D videos should get you closer to three hours of use.

A full charge should take roughly two hours. You can also use the headset while it is plugged into a charger for extended play.

Is That a VirtualLink Port?

A USB Type-C charge port is located on the left side on the visor, and Oculus includes a 10-foot charging cable in the box, which should give you plenty of slack if you need to plug in while you play. The extra long cable makes us wonder if Oculus has plans to enable PC tethering at some point.

The USB Type-C interface could eventually enable you to plug your Quest into PCs equipped with a VirtualLink port. Oculus has not confirmed plans for such a feature. Although, in March, Oculus VR CTO John Carmack tweeted “Sorry, no promises, but I hope so!” in response to a question about PC-tethering, so it’s not entirely off the table.

I didn’t know what to expect from the Oculus Quest. Ever since the first time I tried a room-scale VR system, I knew one day we’d see standalone devices with the same capabilities, and that would be my ideal VR system. When I heard of the Quest, I hoped it would be good, but until I put one through its paces, I had no idea how good it would be.

I have the luxury of having access to many premium VR headsets. Sitting next to me as I type this is one of every Oculus device, my pick of Vive headsets and the Pimax 5K Plus. But now that I have a Quest at my disposal, I don’t think those devices will see much use anymore. It’s rare for me to identify something as a favorite definitively, but I can’t shake the thought that Quest is currently my favorite VR headset. I wasn’t anticipating it would be this good.

Put simply, the Quest captures everything good about room-scale VR, and it does away with everything annoying and frustrating about PC-connected VR systems by giving you everything in a standalone package. And surprisingly, Oculus made very few compromises with the Quest system.

If you’re OK with reduced texture resolution compared to a PC-based VR system—and let’s face it, millions of console gamers are—the Oculus Quest delivers everything most people need in a VR system. This is how you capture the masses. That’s how you change the game.