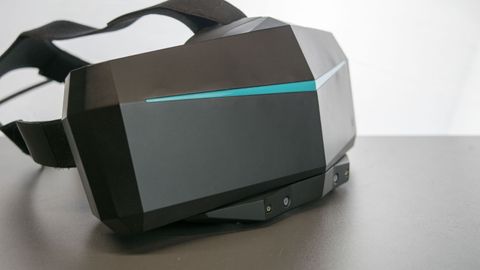 The Pimax 5K Plus is not for everyone. The headset is expensive and demands a lot of tinkering and tweaking to get the settings perfect. If you’re new to VR, don’t get a 5K Plus. But if you’re a VR veteran and want something new and unique, peripheral vision in VR is a experience that will rekindle your love for VR.

Revisiting the Pimax 5K Plus

Last year, we looked at the pre-production model of the Pimax 5K Plus ultrawide VR headset and gave it a harsh review. Despite getting an early hand-built model and receiving access to early beta driver software, we put the headset through the same level of scrutiny that any production device would get, and were underwhelmed. The headset's wide field of view (FOV) and crisp display were nice, but our RTX 2080-equipped test system struggled to deliver a respectable frame rate, souring our opinion of the headset.

Frame rate is of the utmost importance in virtual reality (VR) games, and the fact that a costly top-end graphics card couldn’t do the job killed any hope we had of the 5K Plus being a viable replacement for our HTC Vive Pro headset. Our view at the time was that the 5K Plus' 5K resolution exceeded the limits of existing graphics cards, and there wasn’t much Pimax could do about that.

However, Pimax’s software wasn’t yet fully baked at the time. While our previous review truthfully represents our experience with the 5K Plus at that time, it doesn’t represent the experience you would get from the headset today.

Since our pre-production review, Pimax has had months to improve its software and provided us with a production model, the version shoppers would receive when buying it today. We’re quite pleased and impressed with the changes. You still need a powerful machine to drive the 5K Plus, but Pimax has done a remarkable job improving the rendering performance and image distortion.

We’re still not thrilled with the build quality, but if a wide FOV is important to you, the 5K Plus is an acceptable option. Although we still maintain that the Vive Pro is a better-built device and a superior piece of equipment overall, don't be afraid to consider the 5K Plus if you want peripheral vision in VR.

While the initial 5K Plus we tested was a pre-production model, this time Pimax sent us a headset right off the production line. Surprisingly, the only noticeable physical difference is a different model name on the serial number sticker. Our pre-production model was called a Model P2, and our new unit is a Model 5K. Neither of our sample units have any markings indicating that these are in fact 5K Plus units, as opposed to the 5K Pimax crowdfunded, though it’s our understanding that Pimax never ended up producing the base 5K.

The headset is big for a reason though. It needs enough space to accommodate the two side-by-side displays to produce the headset’s signature 200-degree FOV (for comparison,  the Vive Pro has a 110-degree FOV). Pimax has never disclosed the size of the headset's displays, but the frame of the device suggests the screens are each roughly 5 inches across. Regardless of size, each panel features 2560x1440 pixels for a total resolution of 5120x1440, which the company calls 5K.

The 5K Plus uses custom-made LCD panels called custom low persistence liquid (CLPL) displays. The CLPL panels don’t show any perceivable ghosting or tearing, but they also lack in color production. If you’re looking for OLED-level color reproduction, the 5K Plus will leave you wanting. However, the 5K BE, a business version of the headset, features OLED panels in the same ultrawide configuration.

Despite the large size, the 5K Plus is surprisingly light. Incredibly, Pimax managed to keep weight of the gigantic headset in the same range as Oculus’ comparatively tiny Rift headset (514g versus the Rift's 470g, respectively).

Unfortunately, the light material also equates to weak material. Both our pre-production and production review units have cracks in their shells from minor bumps and dings. Meanwhile, our HTC Vive and Vive Pro have taken far worse beatings, and their shells are doing just fine.

The 5K Plus has a 3-point Velcro harness, which keeps the headset on your face but that’s about it. The straps don't provide a snug, comfortable fit. And the headset doesn't include headphones. For $699 we expect more. HTC asks for more for the Vive Pro ($799), but at least you get a comfortable, mechanically adjustable head strap with built-in headphones on a device that can take some abuse.

Pimax is working on a mechanical strap upgrade like the Vive Deluxe Audio Strap, which would include headphones and presumably correct some of the fitment concerns that the fabric strap introduces. Kickstarter backers are supposed to get the upgraded head strap when it’s released, but retail customers will pay extra for the upgrade.

When Pimax ran its Kickstarter campaign, it said it would eventually have a variety of accessories for its headsets, including an eye-tracking module, scent module and hand-tracking module.

The hand-tracking module ended up being a second-generation Leap Motion sensor that attaches to the bottom of the 5K Plus, as well as the Pimax 8K. Pimax and Leap Motion announced their official partnership at CES this year, alongside the announcement that its 5K Plus, 5K BE and 8K headsets will now have embedded Leap Motion modules with a 180-degree FOV. Our 5K Plus review sample included a USB attachment for the Leap Motion sensor.

How useful this hand-tracking sensor will become is a matter of development support. If Pimax manages to grab a big enough chunk of the VR headset market, it could spur new developer interest in Leap Motion’s platform.

When we last looked at the 5K Plus, we had a really hard time getting reasonable performance out of the device. While you could sit there and tweak the resolutions settings for each individual game to get better results than we achieved, the out-of-the-box experience was quite poor.

In our pre-production review, to get somewhat acceptable frame rate results, we did most of our testing with the headset set to the reduced-resolution Normal FOV setting. We also resorted to reducing the rendering quality in the Pimax PiTool software and cut back the render scale in SteamVR.

But the latest updates to the PiTool software have brought incredible performance improvements. Admittedly, our updated test system plays a role, but Pimax has made dramatic changes to its driver software in the last few months. We can now run our favorite games with the widest FOV setting (200 degrees) and the PiTool rendering quality set to 1x. We found that SteamVR’s rendering scale must be limited to keep the frame rate close to 90 frames per second (fps) in most games. Happily, Valve’s dynamic resolution settings do a reasonably good job at picking the appropriate render scale for maximum performance.

Next Page Test Setup and Conclusion