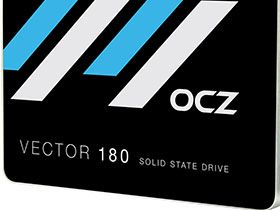 A Closer Look At The Vector 180

Inside, we find what I like to call The OCZ Standard. When consumer SSDs first appeared, OCZ created the now-standard accessory package. Over time, other companies subtracted from it. But OCZ continues adding. Inside the box, you get a desktop adapter bracket, mounting screws, warranty paperwork and a key for Acronis (drive cloning software that makes it easy to migrate your data to a new target SSD). The utility represents an easy way to get up and running without reinstalling Windows and your program files.

OCZ continues to use a heavy metal chassis. The enclosure is one of the strongest you'll find, not that the internals need this much protection. But the case does double as a heat sink for Indilinx's Barefoot 3 controller.

The Vector 180's chassis sports a 7mm z-height, so it fits in mobile platforms requiring the thinner footprint. Not much else changes, physically at least, since the Vector 150.

Inside, the Indilinx Barefoot 3 controller is the same; it's used on a few other OCZ products (the original Vector, Vector 150 and AMD Radeon R7 SSDs all use this processor). Revision M00 has a higher clock rate than the M10 version used in the Vertex family.

And then there's the Vector 180's big addition, an orange tantalum capacitor. These are generally found on enterprise-class SSDs. The capacitor holds enough charge to power the DRAM, controller and NAND until data at rest can be pushed from DRAM to the flash. This reduces the chance of your SSD dying. After all, corrupt table data is one of the leading causes of SSD failure.

Current page: A Closer Look At The Vector 180