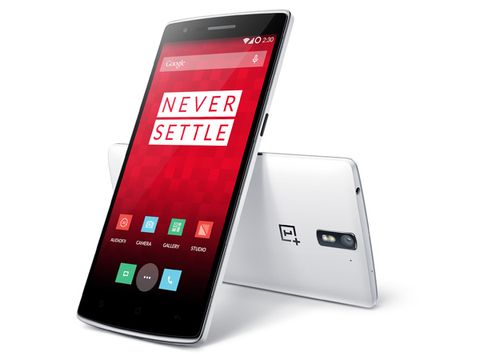 The OnePlus One: “Patience you must have”

A flagship phone is the culmination of superior technology, design, performance, and user experience. Creating one is no small feat considering the complexity of today’s smartphones and requires a significant hardware and software engineering effort. For a relatively small startup like OnePlus to even attempt creating a flagship device straightaway is remarkable, to undercut the price of flagships from juggernauts like Apple, LG, and Samsung by half seems nearly impossible. But like master Yoda says, “size matters not.” So, did OnePlus really create a “flagship killer”?

The OnePlus One meets the flagship requirement for hardware. It has a nice looking 5.5-inch (401 PPI) HD display, a speedy Snapdragon 801 SoC, 3 GB of RAM, 13 MP camera, 802.11ac Wi-Fi, Bluetooth 4, NFC, Cat. 4 LTE, and a large 3100 mAh battery. Missing are microSD card support and a removable battery. Also absent are wireless charging and IP67 certification for dust and water resistance, features not yet standard across all flagship phones.

Build quality is excellent and it feels quite solid with minimal flex, thanks to the internal magnesium frame. No, it doesn’t have an all aluminum shell, or even a metal ring around its perimeter, but there’s still room for plastic amongst the smartphone elite. It’s lighter, and in some ways more durable, than aluminum, and if designed properly, won’t diminish a phone’s quality or desirability. Kudos to OnePlus for attaining such a high standard with its first device.

The One is a nice enough looking phone, but I feel it doesn’t match the appearance of other premium devices. There’s just nothing about it that makes it stand out. A plastic chrome ring around the bezel isn’t enough. While I don't think its appearance will turn many heads, at least it doesn’t look cheap. Of course looks are subjective, and this is just my opinion. Another one of our team members really likes its subdued appearance. If you feel strongly one way or the other, let us know by posting a comment below.

Based on the rather poor performance by other smartphones at this price point, we didn’t have high expectations for the One’s camera despite its good hardware specs. However, we were pleasantly surprised to find that the One has one of the better smartphone cameras currently available. The One’s camera app offers an array of features and control not found in many other devices and image quality is generally quite good.

The One’s camera isn’t perfect though. For starters, it doesn’t have OIS or phase detection autofocus like the latest flagship phones from Apple and Samsung. The One also struggles more than some other phones with image noise in low light conditions. HD video quality is good, but its slow-motion and time-lapse video modes leave much to be desired.

OnePlus’ decision to use CyanogenMod 11s, and to ship the One unlocked, should make it an instant hit with Android enthusiasts. With a vast array of themes and options to tweak, there’s plenty of opportunity to personalize the interface. CyanogenMod also manages to add some useful features without the bloatware associated with many OEM builds. Privacy Guard gives you control over each apps’ permissions, something sorely lacking in stock Android. CyanogenMod’s Profiles automate the management of phone settings by sensing its environment and adjusting preferences to predefined selections. Another useful feature added by OnePlus is the ability to use lock screen gestures, like double-tapping the screen to wake the device and drawing a circle to immediately open the camera. All of CyanogenMod’s features and options, along with access to the Play Store and all of Google’s apps, make it a solid OS choice for the OnePlus One.

For the One, the problem isn’t the hardware or software, but where the software meets the hardware. Our benchmark testing shows the One performing on par with other flagship phones running the Snapdragon 801 SoC for single-threaded CPU tasks. It’s even slightly ahead of the curve in memory bandwidth and GPU performance. However, multithreaded CPU performance suffers when running the latest firmware. There's also been a reduction in battery life with some of the newer firmware releases, negating the benefit of its larger battery. Fortunately, the latest software release seems to have restored most of its battery performance.

The One we’ve been using for the past several months has also been plagued by random reboots and frequent crashes from the camera app, again highlighting communication issues between the hardware and software. While a serious issue initially, OnePlus has made steady improvements to the One’s stability, however, it’s still not fully stable.

A larger issue has been touchscreen performance, with frequent complaints about the screen being slow to respond, swipe gestures being misinterpreted as taps, and it being unable to recognize multi-touch gestures. While we didn’t experience all of these issues on our devices, we did encounter some difficulty trying to use gestures on the lock screen.

OnePlus has officially recognized these touchscreen issues. The culprit appears to be related to the Synaptics digitizer, which translates the change in capacitance due to the touch of a finger into actual screen coordinates. A firmware fix from Synaptics was incorporated on Sep. 10 and released in the XNPH38R build, which seemed to help but didn’t completely resolve the issue. Another firmware fix was added on Oct. 30 and released in the XNPH44S build, and initial reports seem positive. Hopefully, this frustrating issue has been eradicated.

These user experience issues mar what could otherwise be considered a flagship phone. If you’re thinking about getting the OnePlus One, consider winning the OnePlus lottery an invite to its beta party rather than smartphone nirvana. But if you enjoy tinkering with your phone, and exercise patience, the One can still be a great deal.

With great hardware and build quality, good performance, and flexible software at a bargain price, the force is definitely strong with this One. But this padawan needs to complete its training before it can claim its “flagship killer” status.

>> See the Reader Ratings and Advice for the OnePlus One

Current page: The OnePlus One: “Patience you must have”

Prev Page Results: Battery And Throttling
28 Comments Comment from the forums
Be In the Know