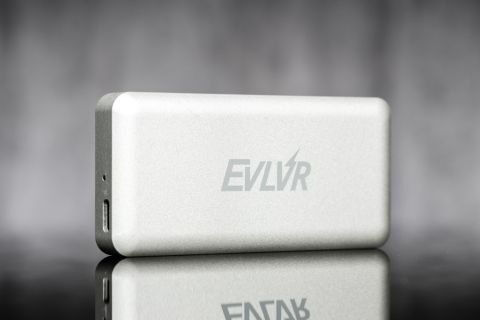 Tired of long file transfer times? Want a speedy portable SSD to compliment your NVMe SSD powered system for media work? Or do you just need a fast, go-to pocket drive for your game library? Patriot claims that its new Evlvr (short for Evolver) external NVMe drive can handle all these tasks, and more.

The Evlvr is Patriot's first Thunderbolt 3 product. The speedy interface paired with the NVMe protocol unlocks more performance potential than traditional connections, like USB. In our tests, the Evlvr provides up to 1.6/1GB/s of sequential read/write throughput, and looks good doing it. The ultra-competitive pricing cements this as a great deal for creators and semi-professionals that want a no-compromise solution at a great price.

Thunderbolt 3 (TB3) portable SSDs bring some of the fastest external storage devices on the market right into your pocket. There were very few TB3 SSDs to choose from just a few months ago, but now the selection is expanding rapidly. While TB3 SSDs are fast, which comes courtesy of the latest external interface technology, they are significantly costlier than their USB competitors. You'll also need either a fairly expensive adapter for your PC or one of the latest TB3-equipped models.

Patriot’s Evlvr sports a sequential read/write speed rating of up to 1.6/1 GB/s, but write speed varies based on capacity. The drive is currently available in 512GB and 1TB capacities, but the 256GB model will come to market soon.

Unlike most external SSDs, the Evlvr has an endurance rating. The 512GB model can absorb 600 TB of write data (TBW) and still remain under warranty, but the smaller devices have less endurance (as listed above). As with any SSD, endurance can be a concern, but Patriot's two-year warranty period will probably expire before you hit the write endurance limitation.

Patriot rates power consumption at 5.2W for the 256GB model and up to 6W for the 1TB model. That means you shouldn’t have a problem powering up the device with the TB3 port, which can supply upwards of 15W for bus-powered devices. That amount of power generates some heat, so we'll test temperatures shortly. Patriot claims the drive shouldn't exceed 0°C ~ 70°C during normal operation. The devices throttles (slows performance) as a self-protection measure if the controller reaches 70C.

The Evlvr comes pre-formatted with the exFAT file system for compatibility with all major OSes. We tested the drive in Windows and used the NTFS file system. This filesystem also enables TRIM support, which helps maintain a consistent level of performance even after heavy use. After formatting, the drive offers 954GB of usable space.

The drive measures roughly half the size of a wallet (102x48x14mm) and weighs in at 88 grams, which makes for a nice small and light package. Two rubber feet on the bottom help prevent the Evlvr from sliding around. The three screws that hold the case together are hidden under the rubber feet.

A large piece of thermal tape transfers the heat from the M.2 drive into the aluminum enclosure. The internal SSD is based on Phison’s PCIe 3.0 x2 E8 NVMe controller and Toshiba's 64-Layer TLC NAND flash, much like Kingston's A1000 SSD. The adapter board hosts the Phison E8-powered PCIe SSD and transmits data over the Thunderbolt 3 connection.

Next Page Performance Results
3 Comments Comment from the forums