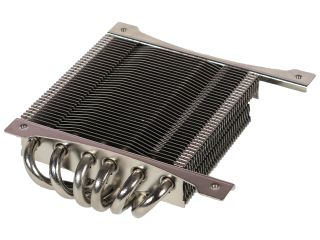 Prolimatech's Samuel 17 is the only product in our low-profile heat sink series that ships without a fan. However, because its mounting frame extends beyond the metal fins, any 12cm cooler can be mounted on top of it.

Despite the atypically-sparse bundle, you do get two sets of fan screws: one that fits fans up to 0.5” thick and another suitable for 1"-thick fans. The large mounting frame allows you to rotate the cooler in such a way that the fan also blows across some motherboard components, such as system memory or power circuitry.

Since the Samuel 17 is obviously intended for compact cases, we mounted a slim 12cm Scythe Slip Stream fan on it (SY1212SL12H). Since the Slip Stream can spin at up to 2000RPM, it should be able to force plenty of air through the sink's fins.

But we also tested this cooler with a 1”-thick Noctua NF-F12 PWM, which can run at up to 1500RPM. As long as it doesn’t make the cooler assembly too tall, Noctua's fan is an excellent match for the Prolimatech cooler, particularly since the fan's rubber corners isolate vibrations.

Apart from its oversized fan mounting frame, the Samuel 17 is the smallest cooler in our round-up at a mere 1.77” tall. But it also employs the largest number of heat pipes. Six nickel-plated pipes quickly dissipate waste heat from the CPU through the array of fins. The heat pipes exit the base plate from one side and are evenly cut.

The cooler is slightly asymmetrical; it's narrower where the heat pipes exit the sink, which helps clear memory modules in the innermost DIMM slot.

The base plate's manufacturing quality is excellent. It is milled on its top to increase surface area, and the bottom is nickel-plated and sanded down.

Prolimatech forgoes a back plate. Instead, two socket-specific mounting brackets need to be attached to the cooler's frame.

After doing that, four plastic washers are slipped over four screws, which are then installed from the motherboard's underside and tightened to those mounting brackets.

DIMM height isn't restricted if you point the side of the sink with bent heat pipes towards the board's upper edge or memory slots. When the bends point left, which means the heat pipe ends overlie the memory slots, DIMM height is limited to approximately 1.18”. When the fan mounting frame extends over those slots, memory modules can be up to 1.7” tall.

The Prolimatech Samuel 17 is the only cooler in our test field that doesn't include a fan, which would make a hefty price harder to justify if this heat sink was still readily available. It doesn't seem to be, though.

If you are able to get your hands on one, its build quality is excellent, and it supports the use of slim fans as well as more familiar 1"-thick blowers. Height is at the low end of the >2” sample set, and our test results reflect that. But we like its asymmetrical build, which should ensure that it fits on most motherboards. By simply rotating this cooler, you can move it out of the way of tall DIMMs or a graphics card. The fan extends beyond the cooling fins, allowing it to blow air across your platform's power circuitry. Naturally, sound level is going to be determined by the fan you choose to install.