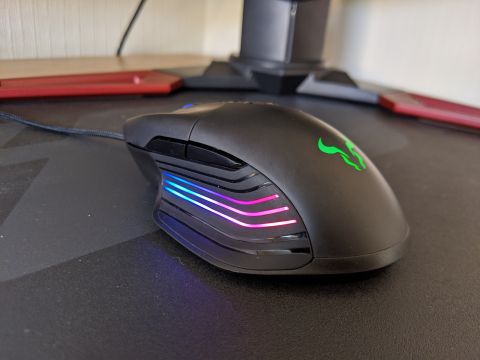 Despite its low price, the Riotoro Nadix comes with luxuries gamers will appreciate, like a braided cable. However, its gaming performance and overall feel can't compete with some other mice in the $30-$40 price range.

Available for $35 the Riotoro Nadix makes itself available for those looking for the best gaming mouse they can find in the budget category. Although it has a smaller price tag, the Nadix still features little touches, like a braided cable, polling rate button and DPI mode cycle buttons, that you wouldn’t find on a basic gaming mouse model.

There’s a great value proposition here on paper, but the proof’s in the hours of CS:GO competitive, isn’t it? Ultimately, the Nadix has some stiff competition in this price range., especially when it comes to overall gaming finesse.

Although its price is low, the Nadix doesn’t look cheap. The matte finish of the ABS plastic across the top feels nice and makes for a good grip, whether your palm’s in dry or clammy mode (aka pre- or post-liter of over-percolated coffee), and it won't attract greasy marks.

Around the sides, lines are scored and finished in a combination of matte and gloss, and there's a central matte band surrounding the scroll wheel and CPI adjustment buttons. The latter is prone to showing up smudges, but it’s a small enough area on the mouse that it’s unlikely to drive you mad.

You'll find the usual forward and back web navigation buttons on the left side of the Nadix, while the left and right mouse buttons are starkly divided by the scroll wheel and two CPI buttons. There's also a polling rate cycle button on the underside of the mouse.

Afters hours of gaming with the Nadix, I wasn't enthused about the feel of any of the inputs. The left and right mouse buttons' clicks felt slightly heavy and slow, although there was very little lateral give on either one. The back navigation button in particular felt imprecise, and it was not always obvious when it had been fully depressed. Depressing the mouse wheel felt a little sticky, and the steps didn't feel very precise when scrolling.

I was also disappointed by the amount of glide -- or lack thereof -- from the PTFE feet at the base. The feet themselves cover a pretty substantial area, but if you plan on using the Nadix with your best RGB mouse pad, for example, there are some things to note. A noticed a small sticky feeling when moving the mouse over cloth or hard-finish mouse pads. This does affect gaming performance, particularly when you’re going for flickshots or tracking players or objects for an extended period or distance. The jerky movement produced when those feet get stuck under the forces you’re exerting is really bothersome.

So I conducted a deeply scientific haptic test: I rubbed the Nadix’s PTFE feet with your fingers and compared it to the exemplary Glorious Model O Minus, which offers the greatest sense of glide out there. And although the incredibly lightweight nature of the Model O Minus certainly contributes to that feeling of glide, the feet did feel different than that of the Nadix. The Model O Minus' feet felt harder and smoother.

Onto the most perplexing element of the Nadix: the chassis design itself. Our review unit's build is all but identical to a Razer Basilisk. The only visual differences to the shape are the absence of a third button on the left-hand side and slightly differently shaped CPI adjust buttons. Elsewhere, it really is the same shape, down to the last gloss finish groove. Your feelings on this will likely vary depending on a) whether you work for Razer’s legal team and/or b) the kind of grip you usually use.

The Nadix looks like a palm grip design but actually works well for either palm or claw. I use something in between the two and found the Nadix to be supremely comfortable. In fact, its comfort level is probably my favorite thing about the Nadix. It's just a shame that I can’t enjoy that same comfort at the contact point between the mouse and mouse pad, due to those sticky feet.

Onto the field testing element, where I warmed up the Nadix with some 3D Aim Trainer. Perhaps it’s the curse of being the next mouse I reviewed after the incredible Glorious Model O Minus, but the tracking from the PixArt PWM3325 optical sensor felt a little underwhelming. The polling rate’s absolutely grand at 1,000 Hz/1ms. However, the Nadix sensor's shortcomings were obvious compared to the Model O Minus' Pixart PMW 3360. Flicks at high speed lacked that extra bit of precision.

Tracking at the lowest DPI preset on the Nadix was a much happier story. The mouse was able to articulate small, subtle movements with great accuracy. By keeping the DPI at the lowest setting in all applications and adjusting in-game sensitivity accordingly, I found I could get pretty reliable performance out of this Riotoro rodent.

Let's get to how the Nadix fared in CS:GO. The age-old war between Ts and CTs is always one of the best barometers for a gaming mouse because it’s about pure aim accuracy. Using a different mouse doesn’t generally make the difference between playing a round like a pro and shooting the walls for 10 minutes, but in a game of marginal gains and split-second reactions, the subtle differences show. With the Nadix underhand… well, I'm not expecting a call from NaVi based on our recent performances.

The imprecision of quicker movements coupled with the stickiness of those PTFE feet made for a slightly frustrating experience. And as much as you can play around with polling rate (up to 1,000 Hz) and CPI (the max is a huge 10,000), you can't tweak these problems away.

Riotoro does offer a free companion software for the Nadix mouse, and it’s very sprightly at just 9MB. Within it are options to remap controls, adjust the CPI and acceleration level of each mode, tweak the RGB lighting and save up to four profiles. The software is simple to use, although it probably won’t win any awards for its aesthetics.

Using the software, I was able to build a profile with four low CPI settings of varying degrees, which proved more useful in first-person shooters than the default settings.

Some RGB fiddling led me to a Breathing effect to match my gaming keyboard. The RGB zones themselves are the Riotoro brand logo, the outer edges of the mousewheel and three bands either side of the mouse body. That's just enough RGB without stepping into garish territory -- if avoiding that is ever possible with RGB lighting.

I appreciate certain design details on the Riotoro Nadix. At just $35 as of writing, it's hard to ignore the overall value you're getting here.

However, I have reservations regarding the lack of glide the mouse exhibited, as well as the the feel of the buttons. Yes, it has a lot of RGB flashing and braided cable goodness for the money, but based on my testing, the performance isn’t quite there for serious gaming, regardless of genre. The Nadix is probably better suited to strategy gaming than shooters, but it only has seven programmable buttons. If you're looking for an alternative, the SteelSeries Rival 3 is solid for about $30, but you'll have to forego luxuries like a braided cable and high CPI.

Still, the Nadix is a decent overall proposition, especially if you're looking for a gaming mouse that's cheap but still comfortable.