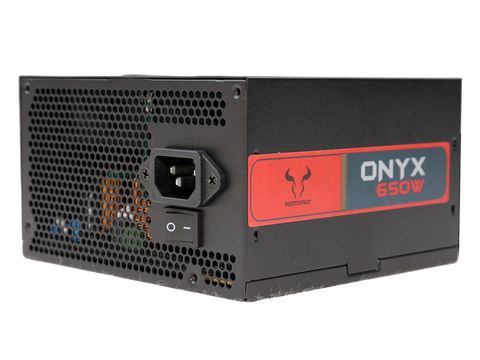 The hold-up time we measured is ridiculously low. GW uses low-capacity bulk caps to save a few bucks, resulting in a hold-up time lower than 8ms. As a point of reference, the ATX spec requires at least 17ms. This is a major downside for this PSU. Great Wall should have used bulk caps with at least double the capacity.

The small NTC thermistor does an average job in restricting the inrush currents.

The first set of tests reveals the stability of the voltage rails and the PR-BP0650-SM's efficiency. The applied load equals (approximately) 10 to 110 percent of the PSU's maximum load in increments of 10 percentage points.

Load regulation at +12V is tight enough for this category. It's merely decent on the other rails, since at 5V and 3.3V our measurements fall within 3%.

Despite the 40°C rating, this PSU doesn't seem to have a problem delivering its full load (and even more) under very high ambient temperatures and for prolonged periods of time. The fan profile is quite aggressive at high temperatures and loads though; from our fifth test onward, the fan spins at full speed. Nonetheless, the output noise is below 40 dB(A), so it isn't that loud.

Great Wall's platform easily satisfies the 80 PLUS Bronze specification's requirements since it is based on a modern design.