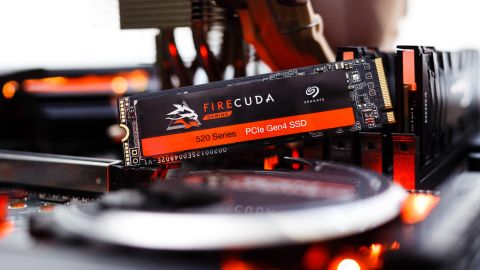 After years of barely having any interest in the consumer SSD market, Seagate now has a solid lineup of great performing SSDs. The Seagate FireCuda 520 is now one of the fastest SSDs you can get for your X570 platform, and it comes backed by a five-year warranty and one of the highest endurance ratings we've seen with a consumer drive.

With performance figures topping 5/4.4 GBps of sequential read/write throughput, PCIe Gen3 SSDs can’t touch it during pure sequential file transfers. The FireCuda 520 features a very large write cache, too, so most users won't ever push it into its slowest state. The drive is even quite competitive with Intel’s Optane SSD 905P, especially for the price. No matter what the workload, you will have a positive end-user experience with all the responsiveness you could ask for.

The FireCuda 520 even undercuts the Samsung 970 PRO’s pricing. However, while the FireCuda 520 one-ups those drives in the pricing department, similar SSDs from the competition are significantly cheaper. At 1TB, the FireCuda 520 costs $249.99, while the Corsair Force MP600 and Team Group Cardea Zero Z440 both cost just $189.99. Even Gigabyte’s Aorus NVMe Gen4 SSD is $40 less, and the Patriot Viper VP4100 is $30 cheaper at the time of writing. Not only that, these SSDs even come with heatsinks preinstalled, making them tough competition for this SSD.

However, if you want to use the FireCuda 520 with your motherboards' built-in M.2 heatsink or some sort of PCIe x16 M.2 adapter card, it might be one of the best options. Removing the heatsinks from most of competing SSDs could potentially result in damaging the drive – especially the Viper VP4100. However, a heatsink might not be necessary for the FireCuda because it didn't throttle one bit while transferring over 300GB of data with no airflow.