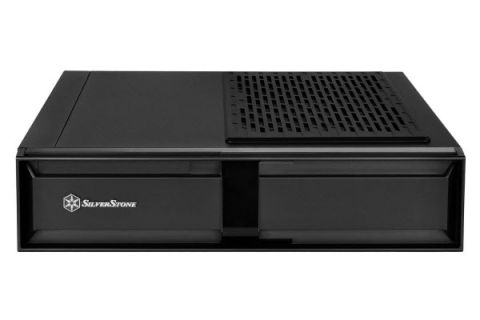 With its low price, compact size, and ability to pack a decent amount of hardware, the ML08 wins our seal of approval for those looking for a great HTPC or mini gaming case.

SilverStone’s ML08, which is heavily based on the company's popular Raven RVZ02, is targeted towards users who want all of the RVZ02's great features, but with a more subdued look. In fact, save for external appearances and an optional handle, which we’ll get to in a bit, the two cases share the same features and are basically identical. But the ML08 promises to be an excellent choice for those building a quiet and compact HTPC or mini workstation.

Continuing the tradition set by its predecessors, the ML08 features a very minimalist outward appearance, and in the right setting could easily be mistaken for a set-top box. The case is made of steel and reinforced plastic, and at a decent (for its size) 7.5 pounds, it feels sturdy. The ML08's front panel is about as plain as it gets, with the power button and USB ports hidden behind a sliding cover, a slot for a slim optical drive hidden in the top left corner, and (in this photo) a stick-on badge of the company’s logo. Last but not least, that bump on the top of the case is actually a removable dust cover for the oversized vents, and there is a similar cover located on the bottom of the case.

Speaking of hidden ports, the black vertical bar on the front of the case slides out of the way to reveal the power and reset buttons, as well as two USB 3.0 ports and the standard set of front audio jacks. One word of caution though: the glossy plastic that the cover is made out of is a fingerprint magnet, and these fingerprints become quite noticeable after just a bit of use.

Remember that handle I mentioned earlier? It's the main feature that sets the ML08 apart from its Raven series cousin. It's an optional handle that mounts to the top of the case, making transport a breeze. The only downside is that the handle only comes with the ML08B-H version of the case, and those who want it are going to have to fork over an additional $10 over the base price. The ML08B-HW version features clear vents without dust covers in addition to the carrying handle. Finally, all three versions include a pair of plastic feet, which attach to the bottom of the case for stability in its vertical orientation, as well as a set of rubber pads that can be used in the horizontal orientation.

Removing the top cover, we find an interior compartment with a reasonable set of features, given the size of the case. Up top there’s room for two 2.5” SSDs or HDDs as well as a mounting bracket for a slim optical drive. Down below is a sizeable cutout in the motherboard tray for easy access to the bottom of the board and a small raised mount to the left of the cutout, which gives the PSU a bit of separation from the bottom of the case for better cooling.

A quick 180 reveals a spacious alcove for mounting a full-length graphics card, or a compact graphics card and a 2.5” or 3.5” drive.

Next Page Hardware Installation, Evaluation & Conclusion
24 Comments Comment from the forums
Be In the Know