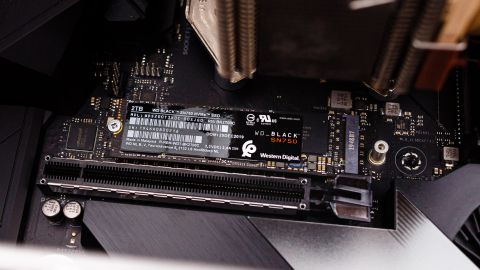 Verdict: The Black SN750 uses the same hardware as the previous model and comes with the same endurance ratings and five-year warranty coverage, too, but this time around it has an updated firmware that boosts performance. The drives also includes an updated SSD dashboard, a 2TB option, and a model with a sleek heatsink, making it a solid choice if you're willing to pay few dollars more.

We put the new Black SN750 against the previous-gen Black as well as the popular Samsung 970 EVO, top-performing Samsung 970 Pro, the new Adata XPG SX8200 Pro, and a MyDigitalSSD BPX Pro with the new 12.1 firmware update applied. We also included the cheapest NVMe SSD option from Intel, the Intel SSD 660p, and a Crucial MX500 SATA SSD.

As with all of our testing, we put the Black SN750 through its paces with all of the power saving features disabled. That means the SSD is effectively in what WD calls "game mode" during our testing.

File copy and read performance was a strong suit of the previous WD Black, but the new model notched a 22MB/s improvement. The Black SN750 beats the Samsung 970 Pro and steals second place, landing just behind the Intel Optane SSD 905P. More impressively, the drive took the overall lead during the read test.

WD’s Black SN750 installed SYSmark in the same time as the Intel Optane SSD 905P, which very few other SSDs have yet to do, and finished with a 1,700-point responsiveness score. This is a minor 10-point improvement over the previous model, but it is similar to most of the other SSDs in our test pool. The Black SN750 also offers a bit more performance than the SATA MX500. It's also light years ahead of any HDD.

WD’s Black SN750 provides great performance during sequential workloads. WD’s firmware improvements focused on improving small-file read performance, although there was a hiccup with 128KB files as performance fell to 1,500MB/s. The drive peaked at over 3.5/3.0GB/s of read/write throughput, keeping up with the best of the best and leaving any SATA-based SSD or HDD in the dust.

The WD Black would have maintained second place overall if we didn't add the XPG SX8200 Pro and updated BPX Pro results at the last minute. Overall, the SN750 landed in third place. This again proves the new firmware helps the drive surpass the Samsung 970 EVO.

WD’s Black has a tiered SLC cache, dubbed nCache 3.0. WD designed this caching implementation to maintain higher write performance during extended workloads, and from the chart above, it does just that. After the drive writes roughly 14GB of data, performance degrades from 2.8GB/s write down to a fairly consistent 1.6GB/s. This is a 100MB/s improvement in base write performance over the previous model and outperforms everything but the Samsung 970 Pro. This makes it a great choice for media editors who consistently work with large video files.

WD’s firmware team also worked to improve thermal and power efficiency. Under load, the Black SN750 shows a 20% improvement when copying our 50GB file folder. That ranks second behind the SX8200 Pro.

Idle power consumption, however, didn’t fare as well. The drive consumed 1.2W at idle with ASPM disabled. With the feature enabled, the drive consumes 0.6W. Other options, like the SX8200 Pro and Intel SSD 660P, consume much less power at idle and would be a better fit for laptops.