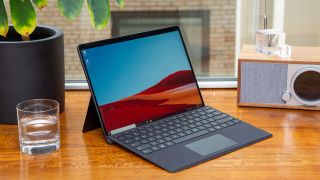 Microsoft plans to bring 64-bit Intel app emulation to Windows 10 on ARM, according to a report from Neowin. The publication cites "several sources," though Microsoft did not comment.

Those sources led the author at Neowin to believe that x64 emulation could come in Windows 10 21H1, with Insiders testing it out in 2020.

Windows 10 on ARM currently supports ARM and ARM64 apps natively and emulates 32-bit x86 apps. Up until now, the assumption was that 64-bit apps simply wouldn't be emulated, due to technical difficulties, performance or some combination of the two.

The lack of 64-bit emulation has meant that many programs simply don't run on Arm laptops, including Microsoft's own recently-released Surface Pro X. That machine uses a Microsoft SQ1 processor, a variant of the Qualcomm Snapdragon 8cx. This would be a boon to Microsoft, PC vendors and Qualcomm if implemented well.

There would be a question, of course, about which version of an app should be presented to users for download in the Microsoft Store and elsewhere. Ideally, for Arm users, it would be a native app (Adobe, for instance, has pledged to do this but not provided a timeline). But if not, the store could offer 32-bit apps or 64-bit apps based on performance, or even let users choose.

Microsoft declined to comment to Neowin and told Tom's Hardware there's nothing to share at this time.