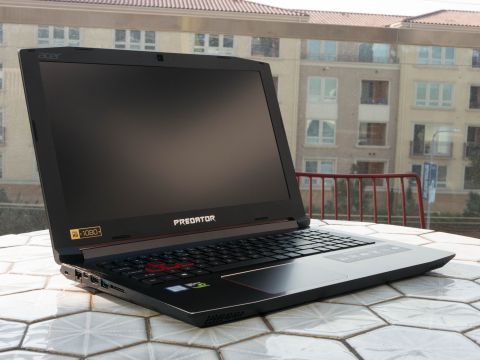 To test battery life, we set each laptop’s battery profile to Balanced while running Tomb Raider’s built-in benchmark at the lowest detail preset. The frame rate is locked at 30 FPS through GeForce Experience’s Battery Boost to limit the strain on the battery. Meanwhile, a script running in the background monitors and time stamps the system’s battery percentage. The laptops are set to hibernate once battery levels reach 5%. We test the battery life with the display at 200 nits.

The Acer Predator Helios 300 contains a rather small 4-cell 48Wh battery, so right off the bat, we didn’t expect its battery life to be impressive. It manages to provide over one hour and 30 minutes, due to its moderately demanding i7-7700HQ and GTX 1060. However, the similarly equipped AVADirect Whitebook 16K2 delivers nearly 20 minutes of additional playtime thanks to its larger 64.98Wh battery. The Whitebook accomplishes this despite its more restrictive dimensions.

If battery life is your main concern, Acer’s Aspire VX 15 performs much more admirably by virtue of its 52.5Wh battery and less power-hungry i5-7300HQ and GTX 1050. The tradeoff, of course, is less performance. On the lower end of the spectrum, the MSI GE63VR Raider only provides 78 minutes of playtime because of its beefy GTX 1070 and 51Wh battery, which is embarrassingly small for such a powerful GPU. All things considered, the Helios 300 has decent battery life, but it isn’t outstanding compared to its main competition.

The Acer Predator Helios 300 provides excellent thermal dissipation. At idle, the CPU and GPU heatsink temperatures don’t rise above 40°C, and after a brief stress test, only heat up to around 67°C. GPU-Z’s GPU diode log reports an average of 58.1°C, with the Predator’s GTX 1060 maxing out at 62°C. In comparison, the AVADirect Whitebook’s GTX 1060 maxes out at more than 20°C warmer due to its thinner form factor and smaller fans. The MSI Raider also runs warmer, but this is to be expected with its more demanding GPU.

We used the SpectraCal C6 Colorimeter to measure the Acer Helios display. We tested unit on its default X-Rite Pantone Color calibration. Be sure to check out our Display Testing Explained article for a full description of our test methodology.

The Predator Helios 300 has an IPS display, which is excellent for a gaming laptop at this price. Its contrasts are also extremely impressive. It exhibits a decent minimum white luminance of 22.7 nits, coupled with a low minimum black luminance of 0.0186 nits, resulting in a high contrast ratio of 1222.8:1. Similarly, the maximum white luminance is 256.9561 nits, which is the darkest out of the laptops in this roundup. The low white luminance is countered by a particularly low maximum black luminance of 0.2012 nits, creating a maximum contrast ratio of 1277.3:1. The Helios 300 has some of the best contrast values we’ve seen on a laptop display in a while.

The RGB levels are a bit unbalanced, with blue levels plummeting as brightness is increased. Meanwhile, red and green levels slowly increase with brightness, but otherwise remain balanced in relation to each other. This will create a slightly yellowish tint.

The low blue levels hurt the display’s grayscale accuracy, but not to a great extent. The ideal display would have a DeltaE 2000 value of three or lower, at which point grayscale errors are imperceptible. The Helios display has a DeltaE 2000 of 3.1227. Our CalMAN grayscale accuracy chart illustrates the DeltaE becoming problematic at higher brightness levels.

The ideal gamma point for well-balanced saturation is at 2.2; unfortunately, the Helios display hovers above 2.2 at all brightness levels, and in some cases, nearly reach a gamma point of 2.4. This results in an over-saturated image. In comparison to the other laptops, the Predator Helios 300 has the highest average gamma point.

Just like grayscale accuracy, color accuracy is measured in DeltaE 2000, with an ideal display exhibiting values less than or equal to 3. The Predator’s display has an extremely high DeltaE 2000 of 6.1411. In particular, you’ll notice errors in reds, greens, yellows, and especially blues and magentas. These display issues may not be deal breakers, but the high amount of inaccuracy could be a barrier if your work needs color accuracy. If you’re more concerned with gaming performance, then this probably won't bother you, especially at Acer’s asking price.