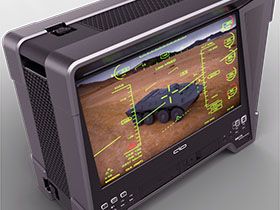 The hardest part about getting to a LAN party usually isn't the drive, but rather the short walk between your car and wherever you're setting up. Even if you built a microATX cube to hold your high-end array of graphics cards, you still need to make a second trip for your monitor, and possibly a third for peripherals.

Some of those all-in-one systems are starting to look nice, aren't they? It's only too bad that most of them utilize proprietary components and are poorly ventilated, leaving little thermal headroom for enthusiast-oriented parts. AIO Corporation wants to provide the solution.

Announced last summer for the European market, the “Drone Station” DRN-STN combines an ATX chassis with AU Optronics' highly-rated M240HW01 V8 LED-backlit, 24”, 1920x1080 panel. That’s the same panel used by Asus in its VG248QE, which we reviewed in (Asus VG248QE: A 24-Inch, 144 Hz Gaming Monitor Under $300), and BenQ in its XL2420T. Unfortunately for our colleagues overseas, we haven’t been able to find a European distributor actually carrying this product. And unfortunately for a few of the rest of us, this is a 120 Hz (rather than 144 Hz) version of the panel.

But AIO has a treat for those who live in the U.S. and are willing to go the 120 Hz route; the firm reached a distribution agreement with retail giant Newegg for Internet-based sales. Unfortunately, as of this writing, the platform is not yet available. But a hard launch is expected imminently.

Oh yes, the display is TN-based. That means it’s a six-bit panel that uses dithering to approximate the 16.7 billion colors available from an eight-bit screen. Our reviews show that the panel does a fairly good job though, or as display editor Christian Eberle says, “It’s getting harder to buy a bad screen these days!” Discriminating photo pros might automatically take a pass even on a well-executed compromise, but gamers will appreciate the technology’s superb response time.

It’s good, then, that AIO Corporation is marketing this as the “World’s first All in One ATX game PC”. Is it really?

Next Page A Gaming All-In-One: The World’s First…What?
Topics
Barebones
Cases
Desktops
48 Comments Comment from the forums
Be In the Know