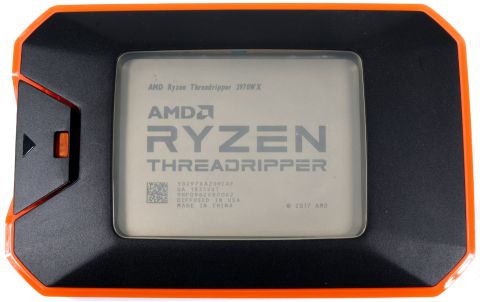 Unlike AMD's previous-gen Threadripper models, the WX-series CPUs include a Game Mode preset in the Ryzen Master software that disables three of four dies. Company representatives tell us this facilitates optimal performance in games. But AMD also provides toggles that allow experimentation with two- and four-die configurations. For this review's gaming benchmarks, we tested the Threadripper processors with Game Mode enabled. Ryzen Threadripper 2970WX consequently becomes a 6C/12T CPU for those tests.

Dynamic Local Mode is a new feature that debuts with the 2970WX, and it only applies to the WX-series models. We include a second bar chart for each game to quantify performance with this feature enabled or disabled at stock settings (labeled Creator/DM).

We have application test results with an overclocked Ryzen Threadripper 2920X, but weren't able to run that chip in its tuned state through our game benchmarks before it stopped working. Once we're able to get it back up and running, we'll update the gaming charts.

Ryzen Threadripper 2970WX's Game Mode drops the 24-core chip's count down to six active cores, but also prevents bandwidth-starved execution resources from handicapping performance during the DX11 and DX12 tests. Nevertheless, the 2970WX drops to the bottom of our chart. A dual-die 2920X easily beats the 2970WX, so it's clear that the quad-die CPU's topography is the issue.

UL's VRMark test lets you gauge your system's suitability for use with the HTC Vive or Oculus Rift, even if you don't currently own an HMD. UL defines a passing score as anything above 109 FPS. Precision Boost Overdrive yields a 13.6 FPS gain for the Threadripper 2970WX.

Again, Ryzen Threadripper 2920X facilitates better performance than the 2970WX at stock settings. If there's a silver lining here, it's that PBO pushes today's subject beyond a stock 2990WX.

The second slide shows us that Dynamic Local Mode, which we used in tandem with Creator mode, imposes a slightly lower frame rate. Dynamic Local Mode's background process avoids shuffling threads that fully utilize the CPU's resources. Ashes of the Singularity does this, so the result isn't entirely surprising.

It is clear, however, that the 2970WX doesn’t scale linearly as cores and threads are added in Creator mode. You'll get similar (or better) performance in Game mode with just six cores active.

Threadripper processors perform well in this title. The 2970WX lands close to the top with PBO enabled, though the much cheaper Ryzen 7 2700 isn’t far behind.

The 2970WX in Game mode is faster than the same chip in Creator mode, even after we enable AMD's new Dynamic Local Mode. The company touted that switch's ability to improve performance "up to 49%,” but remember that those gains happen in Creator mode. You probably don't want to game in Creator mode.

Prev Page Dynamic Mode, Overclocking and Test Setup Next Page Far Cry 5, GTA: V and Hitman
26 Comments Comment from the forums
Be In the Know