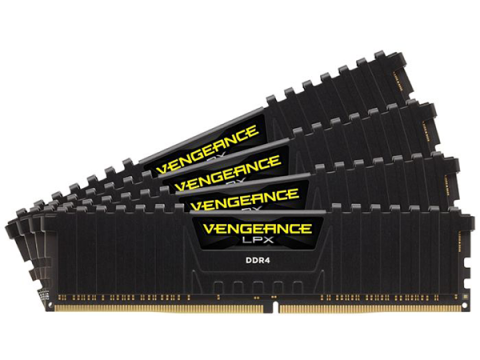 For the same price as its competitor’s kit, Corsair’s CMK128GX4M8A2400C14 adds a pair of fans. Those who really want its 128GB capacity might also want to wait a few weeks to purchase

Long after a competitor’s announcement of 128GB DDR4 kits, Corsair responded with a kit that it was actually ready to ship. Weeks later as I write this review, the “first launched” parts have finally become “second available”. When it comes to producing actual product, Corsair’s 128GB Vengeance LPX DDR4-2400 won this round! But are we ready for it?

Responses to our previous 64GB memory review often turned to questions about the need for more than 32GB of RAM. Some answers came in about scientific and engineering apps while multitasking, and we’re certainly a fan of running workstation tasks on our high-end home PCs. Other respondents mentioned large RAMDisk partitions. Whatever the capacity, we’re sure someone will invent that need. Instead, “Ready for it” refers to 16GB DIMMs, or perhaps the 8Gb DRAM ICs, and the capabilities of our systems to support these.

Unlike sever RAM that can have 32 DRAM ICs per module, consumer memory typically has eight “2Gb” (256MB) or “4Gb” (512MB) ICs per side. Corsair’s CMK128GX4M8A2400C14 relies on 8Gb (1024MB) chips, and the firmware of most PC motherboards isn’t ready to support these. As motherboard manufacturers rush to develop new firmware that does, Asus began spreading around unreleased firmware revisions for its X99 Deluxe and Rampage V Extreme. We received version 1502 prior to its recent release to solve our inability to boot, so the answer “Are We Ready” really comes down to whether your motherboard manufacturer has published the needed update yet. Gigabyte has posted updates for most of its boards, but isn’t on Corsair’s list yet. Asus is close behind in these postings, is already approved by Corsair, and has a wide array of stable memory multipliers and automatic adjustments to speed our evaluation. Memory tweakers who prefer full manual control should choose the brand that best-suits their specific needs.

Generally speaking, memory system complexity increases the minimum stable latency. These complications include doubling the capacity of a DRAM IC, doubling the number of ICs on a DIMM, or doubling the number of DIMMs in a system. The problem of blanket statements though is that they don’t tell us anything about whether a module is higher quality or rated more conservatively. Thus, while Corsair’s ability to maintain CAS 14 in an 8 x 16GB DDR4-2400 set appears laudable, a full stress test is needed to find out how they stack up against previously tested kits.