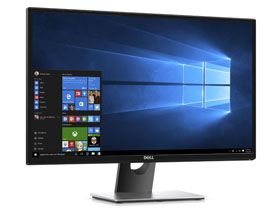 Most gaming monitors price comparable to the SE2717H have 24" FHD screens and support FreeSync. Today’s group contains ViewSonic’s XG2401, AOC’s G2460PF and G2770PF, and Asus’ VG245H and MG278Q. The latter sports QHD resolution as well as a higher price.

Max output isn’t a huge concern for gaming monitors unless they incorporate ULMB. By strobing the backlight, motion blur is reduced but brightness and contrast drop as well. FreeSync displays like the SE2717H don’t have this concern, so we think 290cd/m2 is plenty of light unless you plan to play games next to a sunlit window. The top finishing ViewSonic is bright enough to be used outdoors if you plan to engage in some frag fests while camping, for instance.

Black levels are pretty close among the six screens, with Dell coming in second due to its lower backlight power. Resulting contrast is just under 1000:1 which isn’t too far off the leaders except the XG2401, which excels among TN monitors with a ratio of over 1200:1. The SE2717H fares reasonably well and provides a sharp, detailed picture with good depth and dimension.

Setting the backlight to zero takes the minimum output level down to 40.9096cd/m2. That’s a tad low for blacked-out room gameplay so we suggest bumping up the setting to five for a little more light. With a mid-pack black level result, contrast for the SE2717H remains constant at 932.1:1; almost identical to the max number. While we’d always like to see more contrast from any monitor, it’s especially helpful for gaming where you're trying to pick out fine details in highlight and shadow areas. We’re still looking towards a future that has more VA panel choices in it. That’s still our favorite monitor technology because its dynamic range is so large.

Calibration reduces contrast just a bit, but the SE2717H still maintains its mid-pack placement. Aside from the XG2401, you will see little difference between any of these screens when comparing them side by side. We’re glad to see Dell has set the contrast slider correctly, so no sacrifices are required to achieve maximum color and gamma accuracy. Performance here is pretty typical of the genre. No screens really stand out.

ANSI contrast is only slightly lower than the sequential value, which bodes well for panel quality and suggests that care has been taken in the manufacturing process. Keeping the grid polarizer perfectly flat is key to creating the highest possible intra-image contrast. Our SE2717H sample also displays excellent uniformity, which enhances this test result.