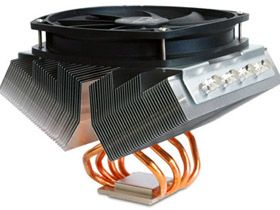 Most of our heat sink round-ups involve tower-style, or cross-draft coolers. Rarely do we venture into down-draft designs because, well, there simply aren't as many of them out there. Of course, that didn't stop us from wondering if the more common cross-draft configurations offer some sort of practical advantage, or if down-draft arrangements can perform just as well.

The vendors, at least, tell us that tower-style coolers are the better choice for most scenarios, and that they’re the way to go for high-performance and gaming PCs. On the other hand, down-draft heat sink and fan combos are recommended in home theater PCs (HTPCs) and more compact desktops.

There are two reasons for this. First, down-draft coolers can be installed in slimmer cases; they can be built in such a way that they require less clearance above the CPU, if only because of the way their fans are positioned. Second, and also a result of fan positioning, surrounding components like memory, the chipset, and voltage regulation circuitry also receive some cooling (and not just the CPU). Down-draft coolers actually look fairly good on paper. We set out to see how they fare in practice.

We went ahead and asked all of the heat sink vendors for their best down-draft designs, ultimately leaving the submission choice up to the manufacturers. Only three companies ended up submitted samples, though the resulting field represents the current crop of top-down coolers pretty well, including a number of performance and price levels.

Next Page Enermax ETD-T60-VD: In The Box And Installation
37 Comments Comment from the forums