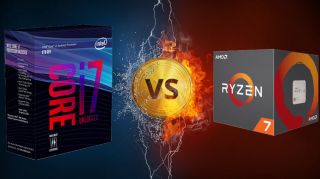 It's the age-old question that has spurred endless debate: AMD or Intel? Today, that rivalry has reached new heights with AMD's Ryzen 2000 Series, often referred to by users (but not AMD) as "Ryzen 2," competing against Intel's 8th Gen "Coffee Lake" for desktop dominance.

To help you decide which processor platform to get, we've put Ryzen 2 and Coffee Lake through a seven-round face-off.

AMD and Intel fight their biggest battles in the Core i7/Ryzen 7 and Core i5/Ryzen 5 families that comprise the bulk of the PC market. As we can see, prices are generally comparable between the two companies' lineups, with Ryzen 7/Core i7 spanning from $303 to $360, while the Ryzen 5/Core i5 series span from $182 to $260.

Even after Intel's adjustments to the Coffee Lake Core i7 series, AMD holds the advantage of more cores in its Ryzen 7 product line. Intel's Core i7 models come with six cores and twelve threads, while AMD's Ryzen 7 line wields eight cores and sixteen threads.

The Ryzen 5 and Core i5 series are the general-purpose workhorses of most desktop PCs, and both lineups come with six cores. Intel has segmented its product stack by disabling Hyper-Threading on its Core i5 models, meaning software can only assign a single thread to each core. Meanwhile, AMD's Ryzen 5 models come with the company's Simultaneous Multi-Threading, which allows software to schedule two threads to each core at the same time. That gives Ryzen 5 an advantage with a total of twelve threads.

AMD's Ryzen 2 (2000 series) offers improved performance in heavily-threaded productivity applications, like rendering, video editing, and transcoding, and it also boosts performance in game titles that can utilize the extra cores and threads. Ryzen 2 also comes with Precision Boost 2, which is similar to Intel's multi-core boost implementation that provides higher boost frequencies when applications exercise multiple cores at once. Neither company discloses the full list of turbo frequencies, so it's hard to make comparisons based on the specifications alone, but we’ll put the processors to the test shortly.

Intel only allows overclocking with its K-series processors, which come at a premium, and you'll also need a pricier Z-series motherboard. AMD's flexible overclocking options have earned it plenty of praise in the enthusiast community because you can achieve nearly the same performance with the less-expensive "non-X" models as the pricier X models.

You'll pay for the privilege, but Intel does hold the uncontested lead in overclocking. Intel's processors generally land in the 4.9 to 5.0 GHz range after tuning, while AMD's Ryzen 2 often taps out at 4.2 GHz. Of course, the silicon lottery applies, so chip quality can have an impact on the maximum attainable overclocks.

Intel also holds the advantage on the memory overclocking front, too. The company's processors have a much higher memory data transfer rate potential than AMD's lineup. AMD's Zen microarchitecture profits greatly from increased memory data transfer rates, which often manifests as impressive performance scaling in games, while you don't see as much of a progressive performance increase from the Intel models.

Winner: Intel. You can push Intel’s CPU and your memory far beyond AMD’s processors, which often run very close to the limits at stock settings.

Intel's stock coolers certainly aren't noteworthy. These dinky coolers match the processors' TDP rating exactly, and Intel doesn't include them with the overclockable K-series models. Shelling out for an aftermarket cooler adds more cost to your build, so this is a problem you're paying for.

AMD's excellent coolers are one of the hallmarks of its Ryzen lineup. These coolers often support at least some level of overclocking, but they are also attractive. AMD's Ryzen 7 series now comes equipped with beefy LED-lit stock coolers, too.

The processors' TDP rating also serves as a general indicator of power consumption and thermal generation. Most of Intel and AMD's comparably-priced models share similar TDP ratings, though the Ryzen 7 2700X stands alone as the only 105W processor. That's higher than Intel's maximum 95W rating.

AMD and Intel's motherboards are also key considerations. As we mentioned, Intel restricts overclocking to its pricey Z-Series motherboards, while AMD allows you to overclock on its less-expensive B-series models.

In contrast, Intel refreshes its chipsets and sockets more frequently. The Coffee Lake models won't work in the previous-generation 200-series motherboards that have the same socket, so 300-series motherboards are your only option. Intel hasn't guaranteed socket support for its future processors, so it’s possible that newer chip generations will require a new motherboard, which restricts upgrade options.

Winner: AMD. Intel squeezes you for every penny if you want to overclock, and its constant socket and chipset changes restricts future upgrades.

When it comes to gaming, Coffee Lake beats Ryzen 2 on most titles, simply because more games are lightly-threaded and benefit from Intel's higher single-core clock speeds. AMD's processors are generally more competitive in game titles that can leverage their additional cores effectively, such as Ashes of the Singularity: Escalation, but Intel takes the lead in titles that benefit from increased frequency and instructions per clock cycle, like Grand Theft Auto V.

As you can see with our Middle-Earth: Shadow of War benchmark results, some games don't respond as well to increased host processing resources, instead responding better to more capable graphics cards.

Our first two slides contain a geometric mean of frame rates for all of the games in our standard test suite. We split these values into average frame rates and 99th-percentile frame rates, with the latter being a good indicator of the smoothness of your gaming experience. The remainder of the slides contain the results of each test.

Intel's Core i7-8700K offers the highest average gaming performance at both stock and overclocked settings, though the Core i5-8600K does provide a slightly smoother experience with stock settings. AMD's Ryzen 2 processors don't provide as much peak performance, but they do offer near-equivalency in our tests at 1080p so you may not notice the difference. If you game with higher resolutions, these performance deltas will shrink further as the GPU becomes the bottleneck.

Intel's Core i5-8400 is the least expensive chip in our tests, but it offers a great level of performance for its price point. The Ryzen 5 2600X also stands out as a capable performer but overclocking the Ryzen 5 2600 yields nearly the same performance. We also see the same story play out with the Ryzen 7 2700X and 2700.

Winner: Intel offers stronger performance in more games. However, if you're streaming, AMD's multitasking might is better.

That means Ryzen excels in decompression, compression, and rendering applications, but the chips also provide more than acceptable performance across our wide range of lightly-threaded workloads.

Winner: Tie. If you are primarily browsing the web, using office apps or even playing with Adobe's creative suite, Intel is faster. However, if you use a lot of multi-threaded, non-Adobe software for rendering videos, photos and animations, AMD is a better choice.

But wait, there's more. The AMD chips all come with really good stock CPU coolers that you might actually want to use while Intel doesn't even give you a fan for its K-series chips and gives you a poor-quality one for the rest of its lineup.

Winner: AMD Ryzen 2 by a landslide.

Ryzen 2 wins this competition by a nose, winning five rounds to four. Of the seven rounds in our face-off, two -- features and productivity performance -- were a tie. However, the real winner here is you. As a consumer, you have a wide variety of great processor choices from two strong manufacturers.

Which CPU platform you choose should depend on two main factors: your budget and what types of software you use most. If you want the best performance for the majority of games and productivity apps, which are lightly threaded, Intel Coffee Lake is your top choice. However, if you want the best speed for the money or you use a lot of heavily-threaded apps, AMD Ryzen 2 was made for you.