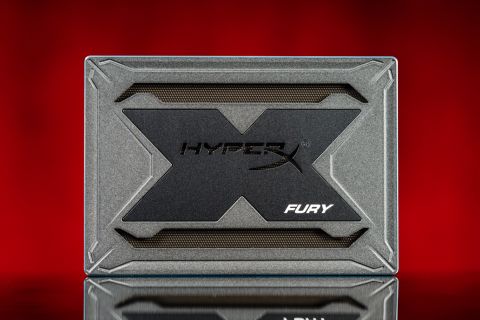 We put the HyperX Fury RGB head to head against a few popular options. The WD Blue also comes with BiCS3 flash and a Marvell 88SS1074 controller, so it's the Fury RGB's closest competitor. We included the Crucial MX500 and Intel 545s, which are two mainstream SSDs featuring Silicon Motion controllers and the latest 64-layer 3D TLC flash from IMFT. We chose two final competitors to better gauge the Fury RGB’s performance value: the Samsung 860 EVO, one of the best SSDs we have tested, and the Gigabyte UD Pro, which is one of the least impressive.

HyperX’s Fury RGB scored a total of 4982 points in PCMark 8’s storage benchmark, ranking third overall. It averaged 270 MB/s of bandwidth during the test, which is very close to the WD Blue 3D SSD and ahead of the Intel, Crucial, and Gigabyte SSDs. The Marvell SATA controller was a bit more agile in this test than the SMI and Phison-powered competitors.

Unlike the PCMark 8 results, the Fury's game loading scores lagged the competition. The HyperX Fury RGB loaded the game scenes in a total of 24.26 seconds, but the other SSDs were faster. The Fury did, however, load up the game scenes much faster than the Gigabyte UD Pro and WD Blue HDD.

Things went downhill little by little as we tested the HyperX Fury RGB further. During our 50GB file copy test, the Fury RGB lagged all other SSDs with an average bandwidth of 107 MB/s. Even the UD Pro, the slowest SSD we've tested yet, performed better. The Fury was lackluster compared to other SSDs, but it still managed to copy the folder more than twice as fast as the WD Blue HDD.

The HyperX Fury finally outperformed the WD Blue 3D SSD during the read test. The Fury's average read speed of 492 MB/s was more than four times faster than the WD HDD.

We installed SYSmark 2014 SE to the HyperX Fury RGB in just under 16 minutes. Again, this was faster than the Gigabyte UD Pro but trailed the WD Blue 3D SSD. To our surprise, the Fury RGB scored only 1327 points during the responsiveness test, ranking last among the SSDs by over 200 points. That's a surprising result considering the drive did so well in the PCMark 8 storage test.

The HyperX Fury RGB showed strong performance as the file size scaled up from 512b to 2KB, but it fell behind most of the other SSDs at 4KB and beyond.

The HyperX Fury RGB surpassed its rated specifications with 561/525 MB/s of sequential read/write throughput, but it ranked near the bottom of the pool with only a slight lead over the last-place Intel SSD 545s.

The HyperX Fury RGB delivered competitive read performance compared to the Crucial MX500 and WD Blue 3D. It also outperformed the Gigabyte UD Pro. However, its write performance wasn't inspiring. The Fury didn't land in last place in either of the read or write tests, but it ranked last in the total score.

The HyperX Fury RGB attained 556/518 MB/s of read/write throughput at QD (Queue Depth) 32. The write performance wasn't very impressive, but the SSD nearly saturated the maximum real-world speed of the SATA interface during the read workload.

The Fury RGB landed either near or at the bottom of the chart during our random 4K performance tests at QD1. Both the Intel 545s and the Samsung 860 EVO SSDs performed a bit better at the lower QD 1-8 ranges, which is what we look for to weed out which of these SSDs performs the best in real-world use.

We use the Quarch XLC Programmable Power Module to gain a deeper understanding of power characteristics. Idle power consumption is a very important aspect to consider, especially if you're looking for a new drive for your laptop. Some SSDs can consume watts of power at idle while better-suited ones sip just milliwatts. Average workload power consumption and max consumption are two other aspects of power consumption, but performance-per-watt is more important. A drive might consume more power during any given workload, but accomplishing a task faster allows the drive to drop into an idle state faster, which ultimately saves power.

The Fury RGB averaged 4.28W during the 50GB file copy test with the LEDs on. That's more than double the MX500 but comes as a byproduct of the LED lighting implementation. With the LED power factored out, the Fury RGB consumed an average of 1.93W during the 50GB copy. The Fury continued its power-guzzling trend during the maximum power consumption tests. We also factored in performance to generate an efficiency metric. The Fury RGB's 25 MB/s-per-watt with the LEDs on, and 55 MB/s-per-watt with them off, proved to be the least-efficient results we've measured thus far.

Prev Page A Colorful Fury, Or Just a Small Flurry? Next Page Conclusion
6 Comments Comment from the forums
Be In the Know