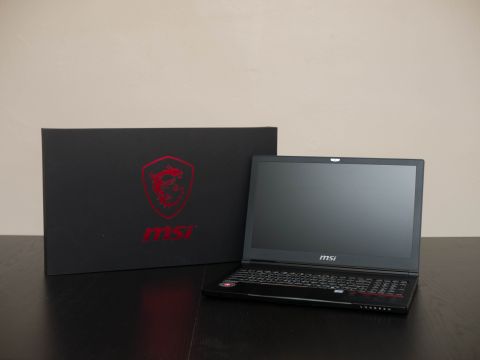 The Stealth Pro is a trim little Max-Q laptop with an attractive design and decent performance, though it can't top other models in the growing Max-Q market in any major way.

Shortly after Nvidia revealed its slim Max-Q GPUs for laptops, we spoke to MSI about its plans for a Max-Q laptop. As it turns out, Nvidia had approached MSI long before Max-Q reached the market, and MSI developed the GS63VR Stealth Pro in preparation. The Stealth Pro has been on the market for a while, and it has supported Nvidia’s GTX 960 and GTX 1060 GPUs.

Now that Max-Q laptops have entered the market, we can review the Stealth Pro the way it was meant to be, with a GTX 1070 Max-Q.

The MSI GS63VR 7RG Stealth Pro arrived in a large brown shipping box. Inside, you’ll find a much slimmer black box supported by two large slabs of closed-cell foam. The black box follows MSI’s signature black-and-red color palette, but considering the Stealth Pro is a thin-and-light gaming machine, the presentation is much more refined. On the top cover, you’ll find the MSI Gaming logo, a depiction of a dragon on a shield, in metallic red.

MSI’s presentation is always top-notch, and the GS63VR’s packaging is no exception. The sleek packaging is a great escape from the usual over-the-top packaging we’re used to.

The Stealth Pro’s exterior features a crisp brushed-aluminum finish in black paint, which is what we’ve come to expect from MSI’s higher-end Gaming Series notebooks. The top cover is spare, sporting tastefully folded accents on the left and right. In the middle is the company logo in chrome lettering, accompanied by the Gaming Series logo in red, white, and chrome. In typical gamer fashion, the dragon logo is illuminated in white when the Stealth Pro is powered. The finish is a sight to behold, at least until you put your hands on it; it's susceptible to blemishes. Most rubberized-plastic and sand-blasted aluminum finishes hold up better to fingerprints and smudges, although they won’t look as sleek.

The interior area is decorated in the same fashion, and this means that fingerprints and smudges will appear rather easily. You’ll constantly make contact with the keyboard and touchpad, so this area will require a bit more maintenance to be kept pristine. Near the top, you’ll find a grid of perforations that acts as an air intake for the Stealth Pro’s cooling system; be sure to keep this area clear. In the middle of the perforations, a red power logo will be illuminated when the system is powered. On the bottom left, beneath the SteelSeries-provided keyboard, you’ll find a SteelSeries logo. On the opposite end are logo stickers highlighting some of the Stealth Pro’s features.

The Stealth Pro’s 15.6” display has slim bezels befitting its thin-and-light design. The side and top bezels measure 0.625” long, while the bottom bezel is 1” long. Rather than rubber feet, the entire bezel features a rubber border surrounding the display, which separates the top cover from the keyboard. The top bezel contains the 1080p (1920x1080) webcam and array microphones. Finally, the bottom bezel has the company logo in chrome lettering.

The Stealth Pro’s chassis is almost entirely aluminum, and the edges are a continuation of the interior surface wrapped into shape. The front edge is mostly plain, but it features a divot near the middle to make the touchpad more comfortable to use. The right end features several LED indicators for sleeping, disk usage, Num lock, Caps lock, and the like.

The left and right edges are nearly identical; they both contain I/O ports and vent cutouts for the Stealth Pro’s cooling solution. The biggest difference is that the right edge features the system’s power button, which has a crisp, metallic red border. Finally, the back edge features the most aggressive elements in the Stealth Pro’s design. It contains three sets of air vents, one on the left for the CPU, and two on the right for the GPU. Red stickers border the vents on the top, and a sticker with “STEALTH” lettering is in the middle.

The bottom panel’s aesthetics are less subdued than the top aluminum exterior. A felt sheet covers the entirety of the bottom panel, with cutouts for the air intake vents near the rear end. The felt material will inevitably be a point of contention among buyers. Some will love it, while others will hate it, but we give kudos to MSI for implementing a texture you won’t find on any other laptop on the market. Besides this are nine triangular rubber feet on the four corners, sides, and middle of the bottom panel to keep the Stealth Pro steady.

Also notable is the bottom panels flimsiness; this is rather worrying because, as a thin-and-light system, the Stealth Pro is susceptible to damage. The internal components are just a hair’s width away from the bottom panel, and one nasty fall will spell doom for this laptop. We’d like to see this addressed in future iterations.

Two cutouts on each of the bottom-panel front corners act as speaker grilles. This means that the speakers are downward-facing, and thus audio clarity will suffer. A more natural solution would have been to place the speakers and grilles on the top, below the keyboard. The speakers themselves aren’t bad if you play audio with the Stealth Pro faced down, but no one is going to do that…

The hinge assembly consists of one long strip of plastic running the entire width of the laptop, with two small hinges at each corner. This is one of the few plastic elements on the Stealth Pro, and it doesn’t detract from the overall build quality or aesthetic. The hinge exhibits smooth movement and offers over 180° of extension, which is more than enough for a gaming laptop.

The Stealth Pro has a varied assortment of I/O ports for all of your gaming needs, including VR. On the left, you’ll find the Kensington lock, an RJ-45 LAN port, a card reader, three USB 3.0 ports, a headphone jack, and a microphone jack. On the right, you’ll find a USB 2.0 port, Thunderbolt 3 over Type-C, an HDMI port, a Mini DisplayPort, and the DC power jack.

The MSI Stealth Pro features a 15.6” 1920x1080 display with a matte panel, standard of most gaming laptops. The element that sets it apart is the smooth 120Hz refresh, which will prove enjoyable in games where the Stealth Pro can achieve high frame rates. The only thing that seems to be missing is support for Nvidia's G-Sync, which is what we’ve come to expect from laptops at this price.

Additional displays can be connected via HDMI 2.0, Mini DisplayPort 1.2, and Thunderbolt 3.

The keyboards on MSI’s laptops are always a treat to use, and that’s because they feature SteelSeries integration. The keys themselves are well-spaced and feature a satisfying travel distance and bumpy actuation, making for a comfortable typing experience. The keys feature a translucent white font that allows the RGB backlighting to shine through the keycaps without much light bleed.

The Stealth Pro’s touchpad has a matte surface and a metallic red border. Unfortunately, the touchpad is not quite as enjoyable to use as the keyboard; it performs adequately for long strokes, but fine movements are hindered by surface drag. Additionally, it has an uneven clicking distance. The top half has a shallow bottom-out distance, whereas the bottom half sinks deep enough for small particles to slip through the crevices. We expect a thin laptop such as the Stealth Pro to be used often on the go (unlike a behemoth gaming laptop), and a touchpad is an integral part of the mobile experience. You’re better off using a mouse in this case.

The bottom panel is secured to the chassis with 15 screws. With these removed, you can snap the bottom panel off, from the front edge. Near the front edge, you’ll see the speakers at each corner, a 7200RPM HDD, and the 51Wh lithium-ion battery. Above the battery, you’ll find the Killer Wireless-AC 1535, which is responsible for the system’s wireless and Bluetooth capabilities. Unfortunately, the SSD and DDR4 RAM slots are tucked beneath the motherboard; upgrade at your own risk.

You’ll find signs of the cooling solution near the back edge. There are two large exhaust fans dedicated to the GTX 1070 Max-Q, and you’ll catch a hint of the copper heat pipes just under it. The opposite side features a single cooling fan for the CPU. Mounts for the CPU and GPU are connected directly to the middle of the motherboard.