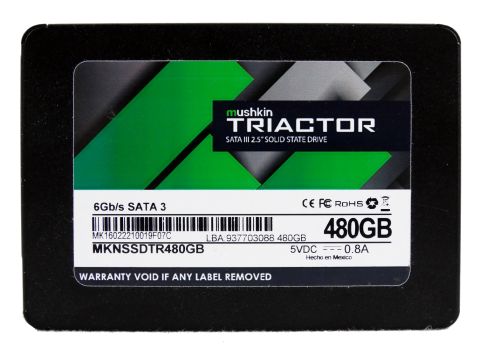 We lined the Mushkin Triactor up against a handful of entry-level and mainstream TLC-based SSDs. The Samsung 850 EVO 500GB is on the upper end of the scale, and it's South Korean counterpart, the Sk Hynix SL308, also features a 500GB capacity point. The Crucial MX300 525GB sits just under the mainstream bracket with the Intel 540s 480GB and the 540s 480GB.

The Triactor series is about value rather than performance. We always like to get an equal dose of both or at the least a solid mix of the two. The Triactor series is very attractive when it has a lower price than the other products on the chart. At queue depth 2, the Triactor performs well, but many of the more expensive drives outdo it. We have to pay close attention of the Triactor and OCZ Trion 150 because these two drives often compete for the lowest price on Newegg and Amazon.

The sequential write performance with the 3-bit per cell flash produces a wavy result due to the SLC buffer flushing data to the TLC portion of the NAND. The Triactor's performance is high for the first few minutes of a write workload, but then it drops down to native TLC write speeds.

We write 128K sequential data to the entire LBA range of the drive during these tests. The full-span test allows us to see how much data we can write to the SLC area, and also the performance after the buffer is full. The Triactor does not utilize a direct-to-die write scheme, which circumvents the SLC buffer when it is full, so the sustained sequential write performance is lower than many of the newer TLC-based products. The Triactor 480GB model delivers enough performance to write data at real-time speeds over a gigabit Ethernet connection. The Triactor 240GB will deliver around 85 MB/s, which is 20% less than a gigabit LAN connection.

Both Triactor SSDs outperform the Trion 150 and Intel 540s in low-QD small-block random reads. This is an important measurement for game launches and the overall user experience. Many Windows operations consist of random reads and writes, and most consumer workloads tend to read more than write.

The SLC buffer does a good job caching many of the small block size writes, but the Triactor uses only a small, fixed amount of space to catch the writes. Our testing overfills the buffer, so the results come out as a wavy line, which shows a mix of cached and native TLC random write performance.

The SMI SM2256 controller was never known for excellent mixed workload performance, but we've found it to be suitable considering the price of the products it's used in. The 480GB Triactor provides better performance than the 240GB model because it uses twice as many NAND packages. The additional NAND packages allow the controller to use twice as many CE (Chip Enable) bonds per channel to boost parallelism, and thus performance.

The high random performance slumps during the mixed workload tests (mid-way through the queue depth scale). At lower queue depths, the Triactor fares much better. The series outperforms many of the other products by a small margin.

Most users will not force entry-level SSDs into steady state conditions, but it's much easier to drop into native TLC write speeds because of the small SLC buffer. Compared to SSDs with equal capacity (512GB and 480GB), the Triactor still puts up a good fight with an 80% sequential read workload.

Common sense tells us not to use the Triactor SSDs in RAID due to the small SLC buffer and low native-TLC write performance. The random 4K steady-state chart backs up the assumption. These drives don't deliver consistent random performance, nor a high average measurement, either. The Trion 150 is the only product that dives lower, but many of the products on the chart feature better performance consistency.

The Mushkin Triactor 480GB compares well to the drives we've selected for the test pool. The drive doesn't fall to the bottom of the test results, but it doesn't show up at the top very often, either.

We combine the results and average them into a tidy throughput score to make it easier to compare performance in a wide range of real-world applications. The Triactor SSDs deliver higher performance than the OCZ Trion 150 480GB, Intel SSD 540s 480GB, and Sk Hynix SL308 500GB. It doesn't come as a surprise to see the Samsung 850 EVO 500GB at the top of the chart, but the Crucial MX300 525GB is the shock of the day. We expected the Triactor to outperform the MX300, but that didn't happen in the 512GB-class.

The Triactor 240GB did surprise us by outperforming some of the other products. The controller doesn't allocate a lot of NAND capacity for the SLC buffer, but it is efficient.

We only focus on the recovery results with low-cost SSDs. The Samsung 850 EVO 500GB delivers the best performance, and that shouldn't surprise anyone at this point. The Mushkin Triactor 240GB is a distant second in throughput performance. The 480GB model suffers a different fate and trails all of the other drives in the chart until it has more recovery time. The test results reveal a lower-than-ideal controller clock speed, or at the very least, a slower memory management engine that needs more time to clean dirty cells.

The Triactor 240GB delivers very good service times compared to many of the TLC-based alternatives on the market, and it even delivers under heavier workloads. The recovery performance could be a little higher, but it's at a severe disadvantage compared to the much larger drives.

The Triactor 480GB doesn't fare well in these tests when we analyze the service time results. We think the drive initiates the garbage collection and wear leveling schemes and doesn't stop until the entire task is complete. Other SSDs use this method as well, but without a better understanding of how the firmware works, we can't be completely confident that it is the root of the problem.

The disk busy time results seem to back our theory of the forced background activity. Once triggered, the processes run and don't stop until the cells are clean. The processes reduce both read and write performance while the controller spends vital CPU clock cycles managing the background cleanup operations.

Both Triactor SSDs deliver average notebook battery life performance. There are not any surprises here. Users get better-than-HDD battery life, but some SSDs are better suited for notebook use.