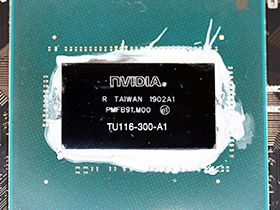 When Gigabyte’s card transitions out of passive mode, its fans pulse on and bounce around a bit before steadily accelerating. Once the GeForce GTX 1660 OC 6G warms up, a constant 2,050 RPM rotational speed is nice and quiet.

Despite a relatively conservative fan curve, the 1660 OC 6G’s TU116 processor tops out at 68 degrees through three loops of the Metro benchmark, making it the coolest-running card in our chart.

Plenty of power headroom and ample cooling allow the GeForce GTX 1660 OC 6G to run at a stable 1,935 MHz with a voltage setting of 1.043V. When cards like the GeForce GTX 1070 Founders Edition show signs of throttling down, Gigabyte’s GeForce 1660 hardly dips at all.

Once again, Gigabyte’s Windforce system pulses high as it shifts from semi-passive to active cooling. The two fans then settle into a curve that responds quickly to warmer temperatures, but never makes much noise.

Bouncing between 1,845 and 1,860 MHz, the GeForce GTX 1660 OC 6G slows down under FurMark compared to the frequencies observed through Metro: Last Light. But it definitely takes less of a hit than other cards we tested. Just look at the white space between the red and yellow lines in this graph, and then the trend from Metro, where the field is much closer together.

Although voltage to the TU116 processor falls under 1V, Gigabyte’s card sustains much higher voltage levels than even EVGA’s GeForce GTX 1660 Ti based on the same GPU.

Prev Page Power Consumption Next Page Conclusion
Be In the Know